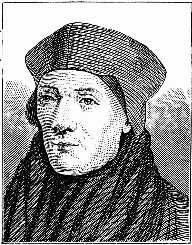 English Catholic Bishop, theologian, and Cardinal John Fisher were born on October 19, 1469, in Beverley, Yorkshire, England. He was one of the four children of his parents, father Robert Fisher, and mother, Agnes. His father passed away when he was only eight years old. Upon the premature death of his father, his mother Agnes married William White and had another five children.

John Fisher had a close association with his extended family all through his life. He had his elementary education in his hometown in a school under the collegiate church. After that, he joined the Beverley Grammar School; a traditional school which came into existence as early as in 700 A.D. Later, in his commemoration, the school authorities named one of the houses of this school after him.

John Fisher enrolled at the University of Cambridge in 1484. He secured his Bachelor of Arts degree in 1487 and the Master of Arts degree in 1491. While studying at the University, he came in contact with William Melton, a monkish theologian. Melton believed in the contemporary reforms in studies emerging out of the effects of the European Renaissance.

Fisher came under the influence of Melton while studying in the residential college Michael house under the University of Cambridge. He also received a papal dispensation along with his master’s degree in 1491 itself. On December 17, 1491, he was ordained into the ministry. In the same year, he was elected as a fellow of his college.

Upon his priesthood, John Fisher won the backing of Lady Margaret Beaufort, Countess of Richmond and Derby, mother of King Henry VII of England. In 1497, he became her confessor.

On Fisher's persuasion, Lady Margaret founded Christ’s College (1505) and St. John’s College at Cambridge. He became the Chancellor of Cambridge and Bishop of Rochester, Kent in 1504.

A career as BishopI & Chancellor

His Controversial Work And Confrontation With The King Henry VIII

Around 1520, John Fisher spoke his mind in his books written against Lutheranism. The Roman Catholic Church did not take his nonconformist voice kindly. However, he was able to make a good reputation all over the continent of Europe as a theologian. He advocated for the freedom of the church and spoke against any governmental interference in the affairs of the church.

The House of Lords witnessed his strong rebuttal against any such state intervention. During the dispute arising out of the validity of the marriage between Henry VIII and Catherine of Aragon, John Fisher sided with Catherine and came into her defense.

This angered King Henry VIII. Fisher also opposed the authorization of the King as the ‘Supreme Head of the Church and Clergy of England.’ The Supremacy Act of 1534 was thus rejected.

The Final Confrontation And The Martyrdom

In March 1534, the marriage between Henry VIII and Catherine became void. The declaration was made according to the Act of Succession. The alliance between Henry and his second wife Anne Boleyn became valid as per the same yardstick.

However, both John Fisher and Sir Thomas More jointly refused to take the oath as required by the act on the ground that it undermined the papal authority. The King did not approve of their dissenting action. He gave orders for their arrest and had them imprisoned at the Tower of London.

In May 1535, the newly appointed Pope Paul III made John Fisher the Cardinal Priest of San Vitale. Pope took the step in a bid to ease the relationship between Henry VIII and Fisher. However, the result was quite the opposite. Fisher's appointment as the Cardinal Priest of San Vitale sent Henry into a rage. He immediately asked Fisher to declare him as the supreme head of the Church of England before the councilors.

Since John Fisher was in no mood to obey the King, he was tried on June 17, 1535, and was convicted of treason. On June 22, 1535, the King's men beheaded him at the Tower Hall. The calm, dignified composure of John Fisher impressed those present during his execution. The Catholic Church canonized him on May 19, 1935, four hundred years after his martyrdom.