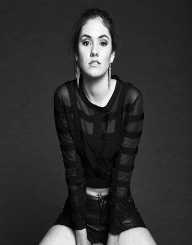 Actress Ronni Hawk was born on September 9, 1999, in Boca Raton, Florida. As a child, she trained at the Boca Ballet Theatre and attended the ballet, jazz, and modern dance classes. She began dancing at five years of age. When Hawk was 12, she began working as a child model in commercials and print campaigns. She has appeared in commercials for Bank of America, Kentucky Fried Chicken, Target, Kohls and many other.

Hawk has two sisters- Katy and Ashlyn and brothers Ben and Jared. She currently lives in Los Angeles, California.

As an actress, Ronni Hawk is best known for her role as Rachel Diaz in the Disney-Channel show Stuck in the Middle, where she started to star in 2016. She made several appearances in films throughout 2014, including the films, Found, Oak Hill Silence, Unspoken, Playing Hooky and Oblivious.