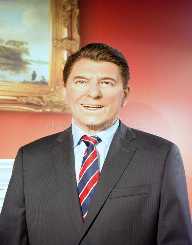 Ronald Reagan Wilson was born on February 6, 1911. He was an American actor and politician. Reagan served as the 33rd Governor of California for two consecutive terms. In 1980, he became the 40th President of the United States. Before his political career, he was an actor, and he appeared in over fifty films. He also worked as a radio sports announcer. Regan died on June 5, 2004.

Ronald Reagan Wilson was born on February 6, 1911, in Tampico, Illinois. He was born to John Edward ‘Jack’ and Nellie Wilson. He had one sibling, Neil who was his eldest brother. His father nicknamed Reagan ‘Dutch,’ and that name stuck with him throughout his youth. Regan attended Dixon High School. He was an active student in sports, acting, and academics. He joined Eureka College on an athletic scholarship where he majored in economics and sociology. He was an outstanding student in sports and other activities. He was made the class president of his class in college.

Ronald Reagan graduated from Eureka in 1932. He, therefore, took jobs as a radio sports announcer. In 1937, he took a screen test which led to him signing a seven-year contract with the Warner Brothers studio. His first appearance in a film was in 1937 when he starred in the movie ‘Love Is on the Air.’ By the end of 1939, he had starred in 19 films.

In 1940, Reagan starred as George in the movie ‘The Gipper.’ In 1941, he was voted the 5th most popular young star from the younger generation in Hollywood. Reagan was also in the military which he left ranked as captain. From 1947 to 1952, Reagan served as the president of the Screen Actors Guild.

Ronald Reagan entered into politics in 1964 where he wrote a speech favoring Barry Goldwater (Republican candidate). In 1966, he vied for the gubernatorial seat in California, and he ended up winning and becoming the Governor of California. In 1970, he was reelected for a second term which he served until 1974. He was a Republican Party conservative. In 1980, he ran for the presidential elections, and he won against President Jimmy Carter. On January 21, 1981, he was sworn in as the President of the United States.

During his term, Ronald Reagan put in place economic, social, domestic and international policies to ensure the development of America’s economy. For example, he brought an end to the price controls on domestic oils. In 1983, America’s economy had thrived, and this led to seven years of economic prosperity under Reagan’s reign. Reagan introduced the ‘Reagan Doctrine’ which provided help to anti-communist movements in Asia, Africa, and Latin America.

In 1984, Ronald Reagan was re-elected as president by winning against Walter Mondale (Democratic candidate). In his second term as president, he set out policies to fight against drugs. In 1987, under Reagan’s reign, Americans and the Soviets signed an agreement to eliminate intermediate-range nuclear missiles. Reagan also contributed to the pulling down of the Berlin Wall. His term as president ended in 1989, and he moved to his home in Los Angeles, California. The Ronald Reagan Presidential Library and Museum were opened in California in 1991.

Ronald Reagan received many awards including American Presidential Medal of Freedom, Congressional Gold Medal, Honorary Knight Grand Cross of the Order of the Bath and Japan’s Grand Cordon of the Order of the Chrysanthemum among other awards. Many schools, buildings, institutions, roads and airports globally have been named after Reagan Ronald, the 40th President of the United States. He was listed among the 100 most important people in the 20th Century by the Times.

In 1940, Ronald Reagan married actress Jane Wayne. They had three children together one of which was adopted. They divorced in 1949. In 1952, he married Nancy Davis with whom he had two children. On June 5, 2004, he succumbed to Alzheimer’s disease.