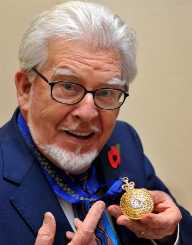 Few persons are multi-talented and display their talents so well. To have more than four careers may be very difficult to manage, but that seems not to apply to Rolf Harris. Born on March 30, 1930, Rolf Harris is an Australian entertainer who plays his trade as a musician singer, songwriter, and a composer. He is also a TV personality, actor, comedian and a painter. His arts were displayed tantalisingly well that he won several hearts in and outside his country. Some of his favourite music compositions are Tie Me Kangaroo Down, Sport which was a hit outside Australia and being on the top ten lists in UK and US.

Harris went out of the conventional musical instruments and came out with the wobble board and Stylophone as well as using didgeridoo in his musical performances. His TV career commenced in the 1960s with hosting TV shows like Rolf’s Cartoon Club and Animal Hospital in the UK. He has also done works in painting and others. However, this great talent had to go to prison for an act of indiscipline. He was jailed in 2014 at age 84 on 12 counts of sexual assault which happened in 1969 and 1986 on four young girls between ages eight and nineteen. His conviction resulted in him being stripped of most of his honours. He has since been serving his five years, nine months jail term at HMP Stafford.

Rolf Harris was born on March 30, 1930, to Agnes Margaret and Cromwell Harris in Bassendean, Perth, Western Australia. Harris was named after an Australian writer Rolf Boldrewood. He had his education at the Perth Modern School in Subiaco whiles there; his self-portrait done in oil was accepted for the Archibald Prize and hanged at the Art Gallery of New South Wales in 1947. He also did some artworks in subsequent years such as the portrait of Sir James Mitchell, a Lieutenant-Governor of Western Australia for the 1948 Archibald Prize and later won the Claude Hotchin prize in 1949 for oil colours with his work On a May Morning.

Harris furthered his education at the University of Western Australia and graduated with a Bachelor of Arts. He also had a diploma in education from the Claremont Teachers’ College now called Edith Cowan University. Harris was not just good when it comes to academics but also to sports. He was a good swimmer who won the Australian Junior 100 meter Backstroke Championship in 1946. In between 1948 to 1952, he was also a Western Australian state champion in different distances and strokes.

In 1952, Rolf Harris moved to London where he studied at the City and Guilds of London Art School. He later in 1953 get a job offer at the BBC on the show Jigsaw, a program he did with a puppet named Fuz. On the program, he did a ten-minute cartoon drawing, and magician Robert Harbin also operated Fuz. At BBC, he was also regular on the program Whirligig in 1954 and also illustrated on Harbin’s Paper Magic program in 1956. Harris along the line of his career met the Australian impressionist painter Hayward Veal who offered to be his teacher and mentor. Veal taught him how impressionism could help him in his portrait paintings.

All this while, Rolf Harris was also entertaining patrons of the Down Under club where he usually performed using his piano accordion. With his frequent performances at the club, he was able to perfect his musical skills would later inspire the composition of Tie Me Kangaroo Down, Sport. His TV performance was still in session, and aside from BBC he also worked with British ITV being the first entertainer to work with two British television stations in 1955 during the industrial era.

In 1959, Rolf Harris returned to his birthplace Perth to handle a show at TVW-7 the first local TV station there, and that was when he recorded Tie Me Kangaroo Down, Sport using a single microphone placed above him in the tv studio. The song was later released as his debut single and performed very well in the UK. He continued with tv shows like Hi There and Hey Presto it’s Rolf, 1964 and also The Rolf Harris Show in 1967, Rolf’s Cartoon Time, 1979 on BBC 1 and Rolf’s Cartoon Club on ITV IN 1989 and several others. Throughout most of his television shows, he exhibited his artistic drawings of pictures on large boards which was a way of entertaining the viewers and displaying his painting talent.

Rolf Harris took his musical career to the next level when he came into contact with George Martin in the UK in 1962. Martin re-recorded all his available songs including Tie Me Kangaroo Down, Sport, Sun Arise and all became a hit, placing well in the chart. He also recorded with the Beatles. In 1969. Harris recorded a rendition of the American Civil War Song Two Little Boys which was a huge success regarding sales and also charted at number one for six consecutive weeks in the UK. The song won him a gold disk award. He also released singles like Papillon in 1974; I Touch Myself, Fine Day, a song he did with Steve Lina. Throughout his single career, he used instruments like the autoharp, didgeridoo and the (wobble board and beatboxing) instruments he invented.

Rolf Harris has done several paintings at school and even exhibited some of his works for awards which eventually won him a Claude Hotchin prize in 1949 for oil colours with his work On a May Morning. One of his most famous paintings was the portrait of Queen Elizabeth II for her 80th birthday which he did at the Buckingham Palace in 2005.

Harris on five occasions won the Most Popular Factual Entertainment Show at the National TV Awards. Most of his awards were however stripped off him when he was found guilty of sexual assaults and jailed accordingly.

Rolf Harris was first arrested in March 2013 for questionings on links to sexual offences during the Operation Yewtree. He was released on the bill without charges after denying all claims. He was, however, arrested five months on and was charged this time with nine counts of indecent assault, dating back to the 1980s involving two teenagers. Other charges included four counts of alleged production of indecent images in 2012. He first appeared in the Westminster Magistrate Court on September 23, 2013, where he pleaded not guilty to nine counts of indecent assault and four counts of processing indecent images of children.

Rolf Harris was released on bail and later in December 2013 other three charges were added to the previous nine by the Crown Prosecution Service. Charges included alleged assaults against females aged nineteen in 1984, aged seven or eight in 1968 or 1969, and aged fourteen in 1975. Harris pleaded not guilty to the counts at a hearing at the Southwark Crown Court on January 14, 2014. The front and backs continued until he was found guilty if 12 counts of indecent assault on June 30, 2014. He was sentenced the following month to five years and nine months in prison. He is serving his sentence at the HM Prison Stafford and expected to be released on July 19, 2017.

Rolf Harris married a Welsh scripture Alwen Hughes in 1958 in London. The couple had their first child, Bindi in 1964.