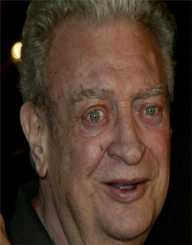 An American stand-up comedian, an actor and a producer known for the catchphrase “I don’t get no respect!” Rodney Dangerfield was born on November 22, 1921, in Deer Park, Long Island New York; died on October 5, 2004, in Los Angeles, CA. He was known for his one-liners, he left no occasion to amuse people with one.

Rodney Dangerfield was born to Jewish parents, father Phil Roy (Philip Cohen) vaudevillian performer and mother Dotty Teitelbaum. His mother was born in Hungary. After his birth, Roy abandoned the family. His mother moved him and his sister to a neighborhood in Queens. He went to Richmond Hills High School and helped his family by selling newspapers, delivering groceries after school, and selling ice cream on the beach, often to his well off classmates. He went through rough childhood years.

He lived through anti-Semitic remarks from teachers and students, and to create a way out he started writing jokes and stuffed them in a duffel bag. Dangerfield began his career at the age of 15 by writing for standup comedians and at the age of 19, under the name of Jack Roy, he began his journey by performing at a resort in Ellenville, New York and thereafter legally changed his name. His first paid job was a comedy routine at a theatre in New Jersey.

Dangerfield’s early days included a stint as a performer at a resort in the Catskills, in upstate New York, where, he performed for ten weeks making $12 per week, plus room and board. To make some extra money he drove laundry and fish truck. He toiled financially for nine years, which went from working as a singing waiter at the Polish Falcon nightclub in Brooklyn to a performing acrobatic diver. Despite earning $300 per week, he still struggled financially to support his family and decided to work as an aluminum siding salesman.

In 1960s, Dangerfield made an effort to reintegrate his career as an entertainer. He started by performing at various hotels in the Catskill Mountains, but with limited success. He later realized that he required an image to work on and succeeded in developing a character for which nothing happens to be right. On March 5, 1967, there arose an eleventh hour replacement for some act at The Ed Sullivan Show where Dangerfield squeezed in and made it a hit. Later, he toured the country doing standup comedy in various clubs. He made appearances on several shows: The Dean Martin Show and The Tonight Show with Johnny Carson (35 times).

In 1969, he decided to build his own comedy club for which he teamed up with his longtime friend Anthony Bevaqua and named it Dangerfield’s comedy club, which is in New York City. Now, he got a venue to perform on a regular basis. Dangerfield’s has been a great success and various comics Jerry Seinfield, Roseanne Barr, Jim Carrey and many more also came up with their performances.

Delighted by his repeated visits at The Tonight Show and a series of commercials he got a role in the movie The Projectionist, but his career reached its peak in 1980s from his roles in comedy movies. His first hit was a comedy movie titled Caddyshack with Chevy Chase and Bill Murray, which later made a way to starring roles in Easy Money, Back to School, and Meet Wally Sparks. He took up a role as an abusive father in Natural Born Killers with Juliette Lewis and Woody Harrelson. For his fans, his performance in Natural Born Killers was worthy of an Oscar but Motion Picture Academy rejected the membership in 1995. He also appeared in an episode of The Simpsons – Burns, Baby Burns and in Home Improvement as himself. Later, he performed in a movie titled Little Nicky, where he played the role of Lucifer. He played a major in Jim Carrey’s journey to stardom.

Rodney Dangerfield was an atheist and a cannabis enthusiast. He married thrice, twice to Joyce Indig. In 1949, Dangerfield married singer Joyce Indig and moved to New Jersey where they had two beautiful children, daughter, Melanie and son, Brian. Later, he married Joan Child from 1993 until his death. During his salesman period, he was interrogated by the FBI for fraudulent sales practices and this news was even reported in The Long Island Star-Journal. Robert Klein, his fellow comedian told that he seldom spoke of the charges and managed to steer clear of a jail time.

He did not have an ideal normal life and went through depression owing to financial crisis. With the passage of time, he became fearful of rejection and finally got booked at a club where he appeared 10 years older but funnier as well from there on he was back in the show business and landed a spot at the Ed Sullivan Show and finally to Vegas.

Dangerfield’s health got worse day by day. He had serious heart problems and endured double heart surgery in 2000. On his 80th birthday, he suffered a minor heart attack while waiting backstage at the Tonight Show.  He was rushed to the hospital where the staff reported that he was a marijuana enthusiast. A year later on his 81st birthday, the comedian performed at the Tonight Show. In spite of his poor health conditions, he kept on with his performances.

On April 8, 2004, Dangerfield underwent arterial brain surgery to improve his blood flow to prepare for heart valve replacement surgery, which was later done on August 24, 2004. Later in September 2004, it was disclosed that he had been in coma for a few weeks. He was 82, when he died from complications of surgery on October 5, 2004, in Los Angeles, California.

In 2009, on The Tonight Show with Jay Leno, Leno accredited for bringing into vogue the approach of joke he had been using.

In 2007, a Dangerfield’s tattoo was among the most desired celebrity tattoos in the U.S.

In Dangerfield’s memory, Saturday Night Live ran a succinct sketch of Dangerfield, which was played by Darrell Hammond at the gates of heaven.

UCLA’s Division of Neurosurgery cited a suite of operating rooms after Dangerfield and presented him with “Rodney Respect Award”, which Joan Child awarded to Jay Leno in October 2005, on behalf of the David Geffen School of Medicine at UCLA at their prescient ball. Other recipients of the award include Chelsea Handler (2012), Bob Saget (2011), Louie Anderson (2010), Jim Carrey (2009), and Tim Allen (2007).

In 1987, he was nominated for the Grammy Award for Best Comedy Recording for “Twist and Shout”

In 1985, he was nominated for the Grammy Award for “Rappin’ Rodney “(album)

In 1981, Rodney Dangerfield won the Grammy Award for Best Comedy Recording for “No Respect”.