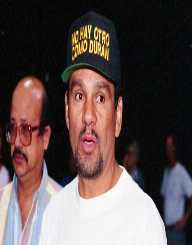 Roberto Duran spent his childhood and teenage years learning how to box. He spent much of his time at the Neco de La Guardia Gym.

One of his earliest professional fights took place in 1968. During the 1960’s, Roberto Duran fought exclusively in Panama. He won all of the major matches he was involved with during the first two years of his career. Some of his most common opponents included Carlos Howard, Juan Gondola, and Eduardo Frutos.

1972 and 1973 were some of Duran’s busiest years of the 1970’s. In June 2971, he fought against Ken Buchanan and won the WBA Lightweight Title. Later on, in this same year, he lost his first major match (to Esteban DeJesus). In 1973, Roberto Duran had three matches in which he had to defend his title. His opponents were Jimmy Robertson, Hector Thompson, and Ishimatsu Suzuki. He won each of these matches and held onto his title throughout the year.

From 1974 to 1977, Roberto Duran continued to compete in fights in North and Central America. He continued to defend his title throughout these years, never once losing it. In 1978, he faced DeJesus again, this time to both defend his title and to try to win DeJesus’s title. At the end of the match, Duran proved he was the better fighter and walked away with the WBA Lightweight Title.

Roberto Duran changed weight classes in the 1980’s. In 1980, he competed against Sugar Ray Leonard for the first time in June. By winning this match, he also earned the WBC Welterweight Title. However, later in the same year, in November, he faced him again, this time losing his title.

Roberto Duran did not have any major matches in 1990 but returned to fighting in 1991. For the first few years of the 1990’s, Duran did not fight as often as he had in previous decades. He also did not have any title matches (winning or defending) until 1998. In this year, he tried to earn the WBA Middleweight Title from William Joppy, but he lost.

The 2000’s was Duran’s last decade of professional boxing. During 2000 and 2001, he only had three major matches. He won two of them (against Pat Lawlor and PJ Goosen) but lost in his final match to Hector Camacho. All in all, he won over a hundred matches, and only lost 16 in his entire professional boxing career.

During his boxing career, Roberto Duran had the occasional cameo in television shows and movies. One of his most famous roles was as a fighter in the film Rocky II. He has also appeared in Harlem Nights, Miami Vice, and CSI: Miami.

After retiring from boxing, Roberto Duran stayed connected to the sport by working as a boxing promoter.

He is also the face of the water bottle company, Panama Blue.

All of Duran’s awards and accomplishments are due to his boxing career. Some of his achievement, not including his Title wins, are below.

In 2007, Roberto Duran was inducted into the World Boxing Hall of Fame.
He was ranked #28 in The Ring’s Top 100 Greatest Punchers of All Time list.

A movie about his boxing career, Hands of Stone, was made in 2016. In this film, Roberto Duran is played by Edgar Ramirez.