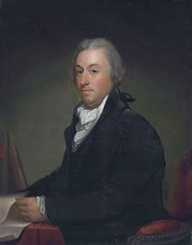 Robert R. Livingston was one of the founding fathers of the United States. He was a part of the Committee of Five of the Second Continental Congress who drafted the Declaration of Independence.

Livingston belongs to the famous Livingston Manor, a 160000-acre tract of land which was granted to his great-grandfather Robert Livingston the Elder in 1715. From then onwards, the Livingston have spread their wings along the Hudson River. Livingston’s father was Robert Livingston. He was famously known as Judge Livingston. Livingston had 9 siblings. He graduated from Columbia College which was known as King’s College at that time. In 1770, he became part of the bar council and started practicing with his college friend John Jay.

On 11 June 1776, after a brief stint as the Recorder of New York City, Livingston was chosen as one of the five committee members famously known as the ‘Committee of Five’ for drafting the Declaration of Independence. The other four members were - Thomas Jefferson (the main architect of the Declaration), Benjamin Franklin, John Adams, and Roger Sherman.

Like his father, Livingston had an affinity toward the Whig Party. He became both the Chancellor of New York and U.S. Secretary of Foreign Affairs. He held the latter post from 1781 to 1783. In 1784, Livingston, who was a Freemason, became a Grand Master of the largest and oldest Freemason organization, Grand Lodge of New York.

In 1789, Livingston presided over the inauguration ceremony of the first President of the United States where he delivered the presidential oath to George Washington. Livingston faced off against his old friend John Jay when the former joined the Jeffersonian Republicans in 1789. Jay by then had become one of the most important leaders of the Federalist Party. He drafted the Jay Treaty which was opposed by Livingston. Jay eventually got his revenge when he defeated Livingston in the hotly contested race for Governor of New York in 1798.

Livingston remained Chancellor for 24 years until 1801. He was referred to as ‘The Chancellor’ for remaining in office for so long. Livingston was appointed as U.S. Minister to France after Thomas Jefferson became the President in March of 1801. His greatest feat as a minister was to carry out the successful acquisition of the territory of Louisiana from Napoleon Bonaparte’s France, famously known as the Louisiana Purchase.

On September 9, 1970, Livingston married Mary Stevens who was the daughter of Continental Congressman John Stevens Jr. The house which Livingston initially built in Clermont was razed to the ground by the British. In 1794, Livingstone built another sprawling house and named it Arryl House. To commemorate the 100th anniversary of the Louisiana Purchase in 1904, The U.S. Post office released postage stamps of Livingston and other key figures of the momentous occasion.