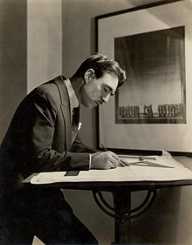 Robert Edmond Jones was a film and theatrical stage designer, who led the early sets for color stage performances and films in the US.

Robert Edmond Jones was born in New Hampshire, the USA on December 121887. The second born in the family, he was the son of Fred and Emma Jones. Jones took interest in arts from his formative years. He started taking music lessons at the age of nine.

In 1912 he relocated to New York. He initially did some costume design jobs for one year. He then left for Europe in 1913. He was denied entry in the stage designing school in Florence, Italy. Frustrated, he left for Germany. He enrolled at the German Theater and studied under Max Reinhardt in Berlin. Jones did his apprenticeship for one year. In November 1914, Jones returned to the US from Germany. He abandoned his production project titled The Merchant of Venice due to the start of WW1.

In the US, Jones started marketing the concept of The New Stagecraft. The concept involved the use of multi-color illuminations and simple lighting. In the middle of November 1914, Jones made his first exhibition under the new concept in New York. His exhibition included his abandoned project The Merchant of Venice. He was highly acclaimed by the industry critics.

Reeling from the commercial success of his exhibition, Jones was hired by Arthur Hopkins. In January 1915, Jones organized the production The Man Who Married a Dumb Woman. The two had a monumental success by their collaboration. They also heralded a new era in the stage production of the American theater plays. Jones managed to break from the old traditions by his new concept. He brought a simple but effective symbiosis between the director of the play and designer of the stage.

Jones and Hopkins forged a working relationship that lasted for close to two decades. During this partnership, Jones presented settings for plays like The Glittering Gate, Hamlet and Richard, and Macbeth. He supervised the set-up of over 40 productions while working with Hopkins. Jones also helped director Joseph Urban in his productions. Jones set the stage for the play Caliban by the Yellow Sands. As a costume and design manager, Jones worked with various theater groups. The most notable was the Washington Square Players. He did several productions with the group such as The Iceman done in 1930, The Philadelphia Story produced in 1937, and the Iceman cometh produced in 1946.

Jones graduated to the world of production director in the early 1920s. He directed his first play titled Simon the Cyrenian. He based the play on the Biblical figure that was forced to carry the cross of Jesus. After working with Colored Players theater group, Jones left to work with Experimental Theater based in Massachusetts.

He traveled back to Europe for a series of publication of his books. In 1922, he co-authored a book titled Continental Stagecraft. He made a collection of his stage costume designs and published them in a book. The book published in 1925 was titled Drawings for the Theater. In 1952, he published his book Towards a New Theater.

After a brief stint as a media personality, Jones went to Las Angeles. He worked on the designing of the hitherto alien color designs, for the 1934 film titled Becky Sharp. In the following months of 1934, he worked on another film titled LA Cucaracha. Jones did another costume production for the film The Dancing Pirate during his stay in Hollywood.

After leaving the big screen film industry, Jones returned to the theater, He continued setting costumes, as he directed plays and also wrote some artistic journals. He published a collection of his essays under the title The Dramatic Imagination in 1941. Some years later in 1946, he worked on the theater production Lute Song.

Jones continued to work despite his deteriorating health. He resigned to his family farm in his native New Hampshire in 1953. Jones died on November 26, 1954, in his home in New Hampshire aged 66 years.

He is considered the inventor of the paradigm shift of the stage and film costume, décor, and colored lighting revolution in America. His legacy was carried on by his apprentices like Jo Mielziner and Mordecai Gorelik.