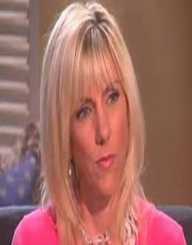 Rielle Hunter was born Lisa Jo Druck on the 20 March 1964 in Fort Lauderdale, Florida to James and Gwen Druck. She was one of four girls born to the couple. The family-owned Eagle Nest Farm in Ocala, Florida and her father was a lawyer.

Her parents divorced when she was in her teens. In the early 1980s, an FBI informant claimed that Hunter’s father, James Druck was involved in insurance fraud concerning the death of valuable horses, including his daughter's horse. Druck was never charged and died in 1990.

Rielle Hunter was educated at St John Lutheran School then graduated from North Marion High School in Ocala, Florida. She then enrolled at the University of Tampa and later transferred to the University of Florida but left without obtaining a degree

An aspiring actress Rielle Hunter appeared in some films including Ricochet (1991). She produced and acted in Billy Bob and Them (2000) and also appeared on television in an episode of Lingo. She also had a film production company.

In 2006, Rielle Hunter was hired to work as a videographer on John Edwards’ presidential campaign. They began an affair while Edwards was still married to Elizabeth and in 2008, Hunter gave birth to their daughter. The National Enquirer newspaper reported on a liaison at a hotel in Los Angeles and also brought up the existence of Hunter’s child. Edwards distanced himself from Hunter and Andrew Young, Edward’s aide at the time, claimed to be the unnamed father of the child. Young later claimed that Edwards was the father.

Their affair turned into one of America’s sensational scandals. Elizabeth Edwards was said to be one of her husband’s most valuable political assets. She discovered the relationship after finding a secret cell phone Edwards used for talking to Hunter. He told his wife the affair was a one-night stand, but instead, the relationship continued. Elizabeth’ breast cancer returned, and the couple announced it at a joint press conference in March 2007.

In late January 2008, Edwards announced that he was withdrawing from his campaign. Hunter’s daughter was born in February 2008, without a father’s name on the certificate.

The National Enquirer pursued the story and eventually, Edwards admitted in a television interview with Bob Woodruff (August 2008) that he had lied about his relationship with Rielle Hunter but continued to lie about being the father of Hunter’s baby. It was in January 2010 that Edwards finally admitted that he was the father of Hunter’s child. This was two years after he had withdrawn from his campaign. His wife Elizabeth filed for divorce but died on the 7 December 2010, before it had been finalized. Hunter and Edwards remained in a relationship until 2015.

Rielle Hunter wrote a memoir, What Happened: John Edwards, Our Daughter, and Me (2012). In 2018, she started a YouTube.com channel Real Rielle selling cleaning products.

In August 1991, Rielle Hunter married Alexander Hunter III in August 1991 in México, and they settled in California. The couple divorced in 2000.