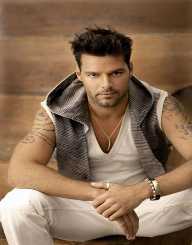 Ricky Martin is a singer who ruled the Latin and American pop scene during the 1990s. His initial stint was with the Menudo, an all-boy Latin pop band while he was a teenager. He, however, parted ways with them for him to pursue his career as a solo artist. A couple of Alba was released in Spanish before he chose to compose the official theme of the 1998 FIFA World Cup, La Copa De La Vida (The Cup of Life). He later performed this same song at the 41st Grammy Awards. His single blockbuster, Living La Vida Loca, however, brought him the worldwide recognition that he needed.

Ricky Martin successfully put the Latin pop genre on the map of the world. He is well too popular among other Latin artists in the Market. One of the thing that added to his success is the ability to record in the English Language for the English Market. He is also known for selling over 70 million albums across the globe till today apart from the awards he is known for.

Ricky Martin was born December 24, 1971, in San Juan, Puerto Rico to Enrique Martin, who was a Psychologist and Nereida Morales, an accountant. He was born as Enrique Martin Morales, but his parents divorced when he was two. He kept shuffling between his dad’s house and granny’s while he was young. He took up acting and singing lessons at the age of six before started performing in school plays and as a chorister. At the age of eight, Ricky Martin was able to break into TV commercials for many food-related products including restaurants and soft drinks as well as toothpaste.

After three auditions and his first performance at the Luis A. Ferre Performing Arts Center, San Juan, Ricky Martin got selected in the Latinboy Menudo band in 1984. He then traveled around the world as the Lead Singer for about five years with performance in various languages. He, however, left the group in 1989 at the age of 17 after 11 Albums have been recorded. Ricky Martin went back to school, finish both his university and secondary school education. He, however, dropped out from the college for his performance on stage, Mama Ama el Rock. He released his debut solo Spanish-Language album in 1991 with Ricky Martin. It was a hit and led the Latin Chars before the success was later followed by a second album two years later. He, however, broke his way into Hollywood by debuting with Getting By on the American TV. He was also known to have acted in the General Hospital of 1995.

Ricky Martin, however, in 1999 launched his English album, Ricky Martin in 1999 and was later declared the most successful Hispanic artist. He established the child advocacy organization for the purpose of fighting child exploitation and trafficking. Later on, his Spanish hit album was compiled in 2001 before he churns out another English pop which was very successful in French-speaking countries, France precisely. He embarked on different tours and even traveled worldwide calling his journey, Black and White Tour. He released hit albums following the tour.  His work, Musica+Alma+Sexo reached No. 1 on the Billboard Top Latin Albums in 2011. He also made a special appearance on Fox TV before he released his book Santiago the Dreamer in Land Among the Stars in 2013 generally for children. In 2014, he ended the Mexican one World Tour at the opening of the 22nd Central American Carribean Game.

His major works are many as Ricky Martin has some hits to his name. He has a single Maria who became his first international hit single to be sold worldwide and around five million copies were sold. It also reached the NO 1 in Belgium, Australia, and France. He also composed a hit which was used as the official theme of the FIFA World Cup in 1998. He also performed at the tournament’s final and the hit is La Copa de la Vida.

Ricky Martin has numerous awards and achievements to his name. Some of his awards are as follow:

Ricky Martin had a relationship with a Mexican TV presenter, but the relationship ended in 2005 after 15 years. He is also the father of a set of a twin which was born from a gestational surrogate. He also accepted the fact that he is a homosexual in 2011 by dating Carlos Abella whom he separated in 2014.