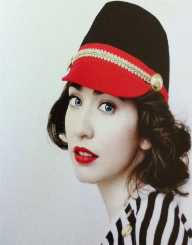 Remember Her to Life: Regina Spektor

Regina Ilyinichna Spektor was born on February 18, 1980, in Moscow, former Soviet Union (USSR)/ present-day Russia to a Jewish musical family. Her father, Ilya Spektor, was a photographer and an amateur violinist and her mother, Bella Spektor, was a music teacher in Russian College of Music and now teaches at a public elementary school in Mount Vernon, New York. She grew up in Moscow until the age of 9 and began learning the art of playing classical piano at the age of 6.

Regina Spektor began practicing piano on a Petrof upright, which was gifted by her grandfather to her mother. She was nourished with a good dose of Russian classical music and was brought up listening to the famous Russian music talents like Vladimir Vysotsky and Bulat Okudzhava. Her father supplied her cassettes of rock and roll bands of the likes of the Beatles, Queen, and the Moody Blues.

In Russia, Regina’s family was being persecuted for their religious faith, and they were facing ethnic and political discrimination over their Jewish origin. In 1989, the then Soviet Union ruler Mikhail Gorbachev announced his policy of perestroika and it enabled the Spektor family to immigrate to the United States of America in search of greener pastures. Regina Spektor was particularly unhappy over the fact that the Petrof upright piano had to be sold before leaving Moscow as they were barred from taking the piano along with them as it was a property of the Soviet Union.

They reached United States traveling through Austria and Italy and were given the status of refugees in the USA with active help from the Hebrew Immigrant Aid Society. Regina and her family finally got settled in the Bronx region of New York, an area mostly infested by immigrants from different countries. Regina Spektor enrolled herself in a Jewish day middle school called SAR Academy (Salanter Akiba Riverdale Academy) situated in the Riverdale section of the Bronx. She earned her high school graduation from the SAR Academy.

Her passion for playing the piano was severely hindered due to the absence of any piano in their possession during their stay in the Bronx. However, Regina Spektor was fortunate enough to have found Sonia Vargas, a music professor at the Manhattan School of Music, who was kind enough to give her free piano lessons. Sonia Vargas eventually became Regina’s music teacher. Regina took piano lessons from Sonia till she attended the age of 17. Regina was enrolled for her higher secondary course at the Frisch School, a yeshiva in Paramus, New Jersey. She was later transferred to the Fair Lawn Public School, Fair Lawn, New Jersey and completed the last two years of her high school education from there.

Upon completion of her high school education, Regina Spektor studied at the Conservatory of Music of Purchase, State University of New York and earned her degree in music in 2001.

While studying at the Conservatory of Music of Purchase, Regina Spektor was a favorite among the students at the Purchase musical community. Encashing on her favorite status, she teamed up with jazz bassist Chris Kuffner and recorded her first self-produced album, "11:11", which had a powerful jazz influence for apparent reasons. The album was released as an Indie record in 2001. She released her second indie studio album ‘Songs’ in 2002. The year 2003 was eventful for her as she was introduced to the leading New York-based American rock band ‘The Strokes’ by the producer of the band Gordon Raphael. She went on a nationwide tour in 2003 with The Strokes on their 2003-2004 ‘Room on Fire’ tour. The tour included high-quality performances at The Theater at Madison Square Garden. The trip with The Strokes opened up new avenues for Regina as she was invited by the Kings of Leon, another prominent rock band of America, to open for them on their European tour.

Regina Spektor was also offered a contract with Warner Brothers' record label Sire Records. She signed the contract in 2004 and published her third album ‘Soviet Kitsch’ and distributed the same on behalf of Sire Records. In the following year, her gradually increasing popularity saw her first TV appearance in different late night talk shows including guest spots. In June 2005, she performed in the opening act for the English piano rock band Keane on their North American tour. On June 7, 2005, she performed at Radio City Music Hall as a part of the tour.

On June 13, 2006, Sire Records produced Regina’s fourth and the most popular record ‘Begin to Hope.’ Debuting at number 70 on the Billboard 200, the album went on to grab a spot at number 20. The huge popularity of its single ‘Fidelity’ was the main driving factor to become a favorite for TV soundtracks. The album sold more than 500000 copies worldwide. It was also certified gold by the RIAA. Regina followed the success of the album in her 2009 release ‘Far.’ The album sold more than 50,000 copies in its first week and peaked at number 3 on Billboard Hot 200.

Regina Spektor's next album ‘What We Saw from the Cheap Seats’ was released in May 2012 in which the single "All the Rowboats" stole the limelight. Her seventh studio album was a compilation of select songs with full orchestra and was aptly titled ‘Remember Us to Life.’ The album was released in September 2016.

In the 56th Annual Grammy Awards the main title theme song "You've Got Time," written and recorded by Regina Spektor for the Netflix Original series ‘Orange Is the New Black,’ was nominated in the Best Song Written for Visual Media category.

Regina Spektor married singer-songwriter Jack Dishel, a member of the band ‘Only Son’ and a former guitarist with the band ‘the Moldy Peaches,’ in 2011. Regina and Jack sang a duet ‘Call Them Brothers’ together. They are blessed with their child, a son, in 2014.