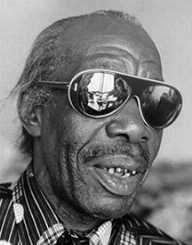 Henry Roeland Byrd was an African American jazz singer who ruled the airwaves of New Orleans in the 1940s.

Henry Roeland Byrd was born on the 19th December 1918 in Bogalusa in the state of Louisiana, USA. His parents left for New Orleans when he was still a baby. He had little formal education in New Orleans. Byrd was introduced to music by his mother. New Orleans was then the melting point of Afro-jazz music. Learning music from the streets of the city, Byrd created his homemade instruments and started entertaining people on the streets.

He continued until he found an old dilapidated piano discarded in the junkyard. He managed to reconstruct whatever was remaining of it. He took the end result of the piano home. Though the piano had several keys missing, Byrd was eager to learn how to lay music. He got help from his friends Sullivan rock and Stormy Weather.

He started his career in 1948. Byrd got some performing time at the Caldonia Club. Impressed by the young Byrd, the owner of the club Mike Tessitore nicknamed him Longhair. In 1949 he recorded and released his first four songs with the band Shuffling Hungarians. He recorded his music under the Star Talent Label. He did not release the songs due to contractual delays. He then moved to the Mercury label house. After his stint with Mercury Label, longhair settled for Atlantic Records. He produced his music and other local tours under the label.

In 1964 Longhair recorded one of his major hit songs Big Chief. He did the song with the input of its composer Earl King. Longhair had little mobility in the 1960s due to the stroke he had suffered at the beginning of the decade. He performed less after his recordings. Longhair became a pale shadow of his yesteryears. To help himself overcome the slump, Longhair became a gambler.

In 1971 Longhair was invited to a major performance. He performed at the New Orleans and Heritage Festival. In 1973 he got another performance at the Newport Jazz Festival. Later in 1973, Longhair was invited to his last major performance concert at the Montreux Jazz Festival. Longhair revived his career. In 1975 he did a musical our in England. Longhair performed at a party hosted by the Beatles great Paul McCartney and his wife. He distributed his songs to different label companies for easier marketing and distribution. In his active career of 32 years, Longhair did eight albums.

Longhair played a distant rhythm of the music. He blended his keys on the piano in a rare combination. He learned this type of piano keyboarding on his first piano which had some keys missing. He incorporated Afro Jazz, Blues, and other Latino Caribbean genres of music. He created his own style of music and dance called the Mambo-Rhumba-Boogie.

His music influenced other musicians to rise above their talents. Some of the musicians who were inspired by Longhair are James Brown, Fats Domingo, and Dr. John.

Longhair was feted on three major occasions. Apparently, all these occasions were done after his death. In 1981 he was inducted in the Blues Hall of Fame. In 1987, he was a recipient of a Grammy Award. In 1992, Longhair became an inductee in the Rock N Roll Hall of Fame.

Professor Longhair died on January 30, 1980. He died of heart failure in his sleep. At the time of his death, he was doing a documentary on his life.

Longhair was serialized in two films. In 1974, a film called Dr. John’s New Orleans Swamp was produced featuring his Longhair’s life and music. In 1982, the documentary Piano Players Rarely Ever Play together was released. The documentary contains his funeral.

His four early songs became the Holy Grail in New Orleans. Despite having recorded only a few songs, Longhair has been immortalized in his community and the jazz world in the US and beyond.