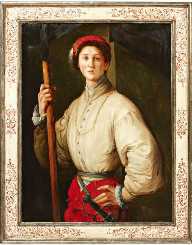 The Italian artist Pontormo was born on the 24 May 1494. His parents were Bartolomeo di Jacopo di Martino Carucci and Alessandra di Pasquale di Zanobi, and he was orphaned a young age.

Pontormo gained apprentices with Leonardo de Vinci, Mariotto Albertinelli, Piero di Cosimo and Andrea del Sarto and began working around Florence under Medici patronage. Working with these artists led him to develop an individualistic style which partly definitely the development of Mannerism. After traveling to Rome, he was influenced by the work of Michelangelo.

One of Pontormo's early portraits was of Cosimo the Elder, the Medici Ruler which is held by the Uffizi Gallery in Florence.

Pontormo also painted frescos of Vertumnus and Pomona for the Medici family at the Poggio a Caiano Villa in Prato. Some of his religious artwork included the Deposition from the Cross. His later work included frescos in the Medici chapel in the Basilica of San Lorenzo in Florence.

Most of Pontormo’s work centered around Florence. From his Visitation of the Virgin and St Elizabeth in 1516 his reputation steadily grew and was cemented with his fresco at the Villa of the Medici family in Caiano. In 1522, when Florence was going through a plague epidemic, Pontormo moved to Certosa di Galluzzo and during his time there painted frescos at the Carthusian monastery.

In 1528 he painted the altarpiece at the Capponi Chapel in Florence, The Deposition from the Cross. One of his final works was the frescoes of San Lorenzo, Florence which unfinished.

Pontormo died in Florence on the 2 January 1557 at the age of sixty-two.