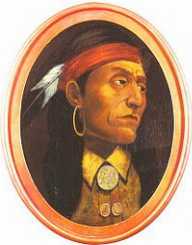 Pontiac, an Eighteenth Century Native American, was best known as the leader of around half a dozen tribal inhabitants of the US. He led these groups of tribes as their Chief. Under his leadership, the Native Americans displayed staunch resistance against the British invasion of the Great Lakes region. This achievement was the highlight of his career as tribal chief. His name came into the limelight during the time of this united fight against the British. The combined resistance by nearly half a dozen tribal groups was started in 1763. The struggle is historically known as Pontiac’s War.

The exact date and place of Pontiac’s birth are under dispute. It is generally believed that he was born around 1720 in a Native American village situated on the Detroit or Maumee River. The precise name of the tribe of his origin is also obscure. Historians found that he belonged from a tribe called Ottawa. According to the tradition of this tribe, Pontiac’s mother may have originated from Ottawa tribe, and his father could have either been an Ojibwa or a Miami.

Around 1747, Pontiac began to lead the Ottawa tribe against invasion attempts made by a Huron leader called Nicholas Orontony. The latter allowed the English to construct a trading post in the district of Ohio. The post was built near Sandusky bay in 1745 and was known as Fort Sandusky. Pontiac allied with the French to thwart any attempts of the British to occupy the areas mostly inhabited by the Native Americans. During the French and Indian war (1754-1763), he supported the French to keep the British at bay.

The French and Indian war concluded in 1760. The British conquered the French colony called New France. Soon, the trading practices followed by the British angered the French. Previously, it was a common practice to give gifts to Native Americans. These American Tribes were mostly dependent on the supply of ammunition and gunpowder to the French and the English. They required these products for their hunting needs. Pontiac’s men regularly received these necessary materials from the French.

General Jeffery Amherst, the maker-in-chief of the British Indian policy cut down such practices of giving valuable gifts to the Native Americans including the materials needed for their hunting. Annoyed by such refusal, a group of tribal joined hands with the French again and vowed to drive out the English from the region. By 1762, Pontiac garnered support from almost all the local tribes residing in the area starting from Lake Superior to the lower Mississippi basin. He made due deliberations with all the leaders of the participating tribes in a meeting held on April 27, 1763.

On May 1, Pontiac explored Fort Detroit and surveyed the strength of the British Army camping there. After this reconnoiter, he attacked the garrison on May 7, 1763. He intended to take the English by surprise. However, as has often been seen in this type of circumstances, the commander of the fort had prior knowledge about this pre-planned attack. There was a mole inside Pontiac’s camp, and he informed Major Henry Gladwin, commander of Fort Detroit, in advance about this possible attack. As a result, Gladwin foiled the attempted attack decisively. Pontiac had to retreat and search for other options to seize the fort.

THE BATTLE OF BLOODY RUN

On May 9, Pontiac surrounded Fort Detroit by his over 900 supporters and cut off the supply of essentials to the fort. The siege continued for a while. Followers of Pontiac also attacked other British forts and settlements. Soon, they overtook control of nine out of such eleven British forts present at that time in and around Ohio valley. On July 31, 1763, Pontiac handed down a crushing defeat to a British consignment at the “Battle of Bloody Run.”

Pontiac’s men also demolished Fort Sandusky. However, in spite of all these developments, he could not prevent the British to get reinforcement to protect Fort Detroit. Unable to capture Fort Detroit even after a three-month-long siege, Pontiac finally withdrew and retreated to the nearby Illinois County.

In August 1767, the British settlers indicted Pontiac on the charges of murder of a seven-year-old English girl named Elizabeth Fischer. However, later on, they dropped the investigation. In his later years, Pontiac became arrogant. This was due to the undue attention he received from the British. On April 20, 1769, a youth from the local Peoria tribe killed Pontiac to avenge the assault of his uncle whom Pontiac had stabbed and severely wounded earlier in 1766.