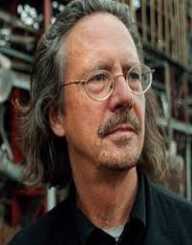 Peter Handke studied at the Marianum Catholic boarding school in the town of Sankt Veit a der Glan. He then studied high school in the city of Klagenfurt. After that, he enrolled at the University of Graz to study law, but he dropped out a few years later.

Peter Handke first started writing for Fackel, his school’s newspaper. During his time at university, he wrote for the avant-garde magazine Manuskripte. In 1966, he gained some fame with his play Offending the Audience.

He wrote a few more similar plays, which did not follow the conventional rules about plot and dialogue. They include Kaspar; The Ward Wants to be Warden and others.

Handke published his first novel, The Hornets, in 1966. In 1970, he published the book The Goalie’s Anxiety at the Penalty Kick. It told the story of a football player who murdered for no reason. It became his best-known novel.

In 1972, he wrote A Sorrow Beyond Dreams, a memoir about his late mother. He worked on many more novels, such as Wrong Move, My Year in the No-Man’s-Bay, and Repetition.

Peter Handke wrote a large number of stories, texts, and essays. He published them in different collections. They included Welcoming the Supervisor; I Am a Resident of the Ivory Tower, The Weight of the World, and others. He also occasionally wrote poetry. He wrote the screenplays for the films The Left-Handed Woman, The Beautiful Days of Aranjuez, The Wrong Move, and Wings of Desire.

Peter Handke won the Georg Buchner Prize, the Vilenica International Literary Prize, the America Award, and the Franz Kafka Prize, among others. The films he worked on won several German Cinema awards.

Peter Handke became very interested in the Yugoslav Wars. He wrote about this topic in his works A Journey to the Rivers: Justice for Serbia and The Tablas of Daimiel. He spoke against the interference of the West, and he gave his support to the extreme actions of Serbia.

In 2006, he gave a speech at the funeral of Slobodan Milosevic, a former President of Serbia who was trialed for war crimes. All of this caused a lot of controversies. In 2006, he was supposed to be awarded the Heinrich Heine Prize, but the decision was withdrawn. In 2014, the same thing happened with the International Ibsen Award.