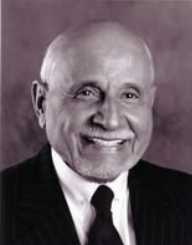 Businessman, politician, civil rights activist and African-American lawyer Percy Sutton famous for representing Malcolm X was born in Texas on the 24 November 1920 to Lillian and Samuel Sutton. He was one of 15 children born to the couple and the youngest. Sutton Snr who was born a slave, was an early civil rights activist, farmer, and principal of the San Antonio Negro High School. Sutton’s mother was also an educationalist.

The family was raised on the family farm in Prairie, Texas where they all had to work hard. He was a boy scout with the rank of Eagle Scout (1936) at the age of 16. His parents insisted on their children all getting a college education, and the older siblings helped, the younger ones when it was their turn to go to college.

Percy Sutton did not complete his tertiary studies before enlisting in World War II (1939-1945), but when he returned from the war, he was able to enrol at Columbia University’s Law School with assistance from the G.I. Bill. He later transferred to Brooklyn Law School. To pay his way through college, he worked long hours at two jobs: at a post office and a subway conductor. After writing his final bar exam, at the outbreak of the Korean War, he enlisted in the U.S. Air Force.

During World War II, Percy Sutton was an intelligence officer with the celebrated African-American Tuskegee Airmen. He left the U.S. Army at the end of the war with the rank of captain who had won combat stars in the Mediterranean and an honourable discharge. In 1950, he joined the U.S. Air Forces and took part in the Korean War (1950-1953).

Returning to the United States in 1953, Percy Sutton started a private law practice in Harlem, New York. He was committed to civil rights issues and offered his services to the civil rights leader Malcolm X and many others. He went on to represent Malcolm X until 1965 when the civil rights leader was assassinated. Sutton continued representing and assisting his Malcolm X’s widow, Betty Shabazz, and family. Because of his representation of high profile figures, Sutton became a high profile figure himself and won respect in the Harlem community.

A member of the Harlem Clubhouse known as the Gang of Four, Percy Sutton was heavily involved in Harlem politics. His Clubhouse allies were New York Mayor David Dinkins, U.s. Representative Charles Rangel and New York Secretary of State Basil Paterson. Sutton was a member of the New York State Assembly between 1965 and 1966.

Then on the 13 September 1966, he was elected Borough President of Manhattan when Constance Baker Motley left mid-term when appointed to the federal branch (1966-1977). In 1977, Sutton ran as the Democratic nominee for mayor of New York City, the year Ed Koch won.

His investment group also bought the Apollo Theatre in Harlem in 1981 and spent over $20 million on refurbishment and renovations. The syndicated music television show It’s Showtime at the Apollo first broadcast in 1987, After Sutton’s retirement, a non-profit organisation took over the Apollo in 1992, and today it is a national landmark and concert hall.