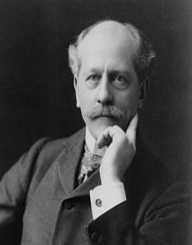 Percival Lowell is an American author, businessman, and astronomer known for his research work on the canals of Mars and the establishment of Lowell Observatory located in Flagstaff, Arizona. Lowell is also a key figure in the discovery of Pluto. During his time, he was dubbed as American’s most influential popularizer of planetary science before Carl Sagan.

He theorized that intelligent life forms were existing in Mars which inspired some literary pieces in the genre of science fiction such as The War of the Worlds by H.G. Wells, Robert A. Heinlein’s Red Planet, and Ray Bradbury’s The Martian Chronicles.

Percival Lowell died at the age of 61 on November 12, 1916, from suffering a stroke. His remains are buried near his observatory on Mars Hill.

The Upbringings of an Educated Man

Born on March 13, 1855, in Boston, Massachusetts, Percival Lowell was the eldest of Augustus and Katherine Lowell’s children. He had two sisters and a brother. His first sister named Amy, worked as a poet, while Elizabeth was an early advocate of prenatal care. His brother Lawrence found work as an Abbott.

Percival Lowell was an alumnus of the prestigious Harvard University and a degree holder in mathematics which he attained in 1876. Before his attendance at Harvard, he attended in 1872 from Noble and Greenough School.


A Call Towards Astronomy

Percival Lowell pursued a career in astronomy upon drawing inspiration from a book entitled La planète Mars which was written by Camille Flammarion. His growing interest was heightened upon seeing the work of the director of Milan Observatory Italian astronomer Giovanni Schiaparelli’s illustration of the Mars’ canals.

As a result, Percival Lowell founded his observatory in 1894 at Flagstaff, Arizona. The location has an altitude of over 6,900 feet and is quite far from city lights making it an excellent place for astronomical observations.

Due to his extensive study of the planet Mars, he published three books based on his findings. He published his first book entitled Mars in 1895 followed by Mars and Its Canals in 1906 and his final book on the subject published in 1908 entitled Mars As the Abode of Life.

Percival Lowell held on to the belief that there are existing life forms on Mars and as a way of survival these intelligent life forms built the canals as a source of water. His theory was later debunked by the NASA’s mariner commissions during the 1960s of which instead of finding canals, the Mariners captured the cratered surface of the planet instead.

Besides his work on Mars, Lowell also studied the neighboring planet of Venus as well, even drawing maps of the said planet.

His most promising work pushed through the last decade of his life in 1906 when Lowell theorized the existence of a possible celestial body beyond the planet Neptune. He named this planet Planet X which he believes is the cause of Uranus and Neptune’s displacement by this planet’s gravity.

Pluto, as it was later known, was first photographed in March and April of 1915 and finally in 1930, it was discovered near the area of the probable location of Planet X by Clyde Tombaugh. As recognition of Lowell’s efforts, the planet was styled based on his initials which became the planet’s first two letters as well.

Lowell’s Work as a Businessman

Before his astronomical career, Percival Lowell served as the United States’ Secretary for Foreign Affairs in a diplomatic business in Korea in 1883 and traveled to Japan as well.

Due to his travels at the Orient, he published many books based on his experiences. On his trips to Japan, he published his work in 1891 entitled Noto: An Unexplored Corner of Japan followed by his 1894 publication of Occult Japan, or the Way of the Gods.