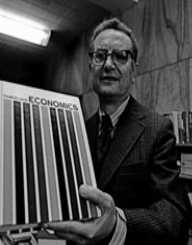 Paul Samuelson was an American economist and academia known as the "Father of Modern Economics." Born on May 15, 1915, Paul Samuelson won the Nobel Memorial Prize in Economic Sciences in 1970, becoming the first American to receive that award. His citation for the award read that Paul Samuelson "has done more than any other contemporary economist to raise the level of scientific analysis in economic theory." The New York Times regarded him as “foremost academic economist of the 20th century”.

Paul Samuelson won other awards like the National Medal of Science in 1996. Paul Samuelson found mathematics as a neutral language for economist and therefore contributed immensely to the mathematical foundation's economics with the book Foundations of Economic Analysis. Paul Samuelson also authored the best-selling Economics: An Introductory Analysis published in 1948.

Paul Samuelson was born to Frank Samuelson and Ella Lipton on May 15, 1915, in Gary, Indiana. He moved to Chicago in 1923, where Paul Samuelson graduated from Hyde Park High School currently the Hyde Park Career Academy. After graduating, he enrolled at the University of Chicago, where Paul Samuelson received a Bachelor of Arts degree in 1935. In 1936, Paul Samuelson received his Master of Arts degree and his Doctorate in Philosophy in 1941, all at the Harvard University. His dissertation titled “Foundations of Analytical Economics” won him the David A. Wells Prize for best dissertation at Harvard University in economics. The thesis later became Foundations of Economic Analysis. While at Harvard as a graduate student, he studied economics under  Alvin Hansen, Gottfried Haberler and Joseph Schumpeter and Wassily Leontief.

After obtaining his doctorate from Harvard, Paul Samuelson joined the Massachusetts Institute of Technology as an assistant professor at age 25. Paul Samuelson became a full professor at age 32 in 1947. Paul Samuelson became an institute professor at University in 1966. During his stay at MIT, he helped transform the Department of Economics into a world-class institution by attracting other renowned economists like Franco Modigliani, Joseph E. Stiglitz, Robert C. Merton, Paul Krugman and Robert M. Solow, all who would later win the Nobel Prizes. Paul Samuelson served as a part-time Professor of International Economic Relations at the Fletcher School of Law and Diplomacy in 1945. From 1948 to 1949, she received a Guggenheim fellowship. In 1989, Samuelson became Vernon F. Taylor Visiting Distinguished Professor at Trinity University, Texas. Being a prominent economist, he served under two United States Presidents, John F. Kennedy, and Lyndon B. Johnson as an advisor.

Paul Samuelson was also a consultant to the United States Treasury, the Bureau of the Budget and the President's Council of Economic Advisers. Paul Samuelson along with Milton Friedman, a Chicago School economist, wrote a weekly column for Newsweek magazine. The two took opposing sides as Samuelson embraced the Keynesian perspective while Friedman adopted the monetarist perspective. Paul Samuelson died on December 13, 2009, at the age of 94 after a brief illness.

Paul Samuelson published the book, Foundation of Economic Analysis in 1946, which turned out to be one of his great works. The book was taken from his doctoral dissertation at Harvard University. Inspired by the classical thermodynamic methods the book aimed to:

Paul Samuelson also published several other books including, Economic Theory and Mathematics – An Appraisal, 1952, The Pure Theory of Public Expenditure, 1954, Paul Samuelson co-authored, Linear Programming and Economic Analysis with Robert M. Solow and Robert Dorfman 1958, Efficient paths of capital accumulation in terms of the calculus of variations in 1960 andThe Collected Scientific Papers of Paul A. Samuelson. Others include Inside the Economist's Mind: Conversations with Eminent Economists with William A. Barnett and Paul Samuelson and the Foundations of Modern Economics in 2002.

Paul Samuelson’s principles textbook, Economics, first published in 1948 became the best-selling economics textbook in history. The book, which has since sold over four million copies, has also been translated into forty-one languages. The book, which was written during the Great Depression and the World War II, hyped the insights of John Maynard Keyes. It was aimed at avoiding or at least to reduce the periodic slumps in economic activity. He noted that "It is not too much to say that the widespread creation of dictatorships and the resulting World War II stemmed in no small measure from the world's failure to meet this basic economic problem [the Great Depression] adequately."