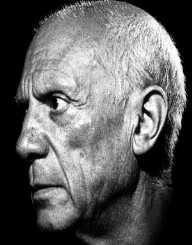 Pablo Picasso's unexpected encounter with Surrealism added value to him, not only on his soft-touch effect but also the message that he came to portray in his portraits. The imagery of his long-term mistress Marie-Therese Walter and Guernica in 1937 should ring a bell. They are the two most incredible and effervescent anti-war paintings.

Pablo’s talent placed him on the list of unforgettable legends. Other recognizable works include there Les Demoiselles d’Avignon in 1907. It doesn’t matter whether you overturn or roll-over his palettes. His paintings are still visible until today. At his middle age, Picasso became more composed about his legacy. Some of his late artwork included the Velazquez, Rembrandt and Ingres canvas.

On 25th October 1881, Pablo Ruiz Picasso was born in Malaga, Spain to Jose’ Ruiz, a painter, and Maria Picasso. He came from an artistic background family. Throughout his early years, Pablo showed some interest in painting. It was claimed that his first uttered word was ‘Piz’ meaning pencil. Pablo’s father took a chance and taught his son several art lessons. At 11 years old, Picasso started to formalize his artistic talent.

In 1895 Pablo Picasso painted his first artwork ‘First Communion’ which still exists until today. His father was ready to groom the little wunderkind and be a notable artist in his later years. To achieve this, he needed to join the best school and gain more knowledge. The only best of the best that his family could afford was to visit Madrid and dazzle on the works by the old Spanish masters. They opted to move to Barcelona, where Pablo continued with his artistry education.

Pablo Picasso’s early training started when he stepped in Barcelona. He made frequent visit to the Els Quatre Gats, a modernist café. That is where he familiarized with different art symbols such as Henri Toulouse-Lautrec and Edvard Munch. It was the same place that Pablo met Jaime Sabartes, and they became acquaintances. From 1900 to 1904 Picasso became a travel lover. He used to spend time in Paris and Madrid as well as Barcelona.

Picasso started to make several sculptures that brought both positive and negative reviews. He used to call it as Blue Period, and then later a blue and gray type of palate dominated his work. The mood of his canvas depicted sadness and depression. He once painted one of his friends whom he met in Barcelona, Carlos Casegemas. The painting subjected melancholic personality.

It wasn’t his fault that Pablo Picasso didn’t manage to paint about his father-son love. He used to travel far and beyond, where he met prostitutes and beggars on city streets. That’s what he used to describe his artwork. Another example is that of The Old Guitarist in 1903.

In the mid of 1904, Picasso brightened his painting from Blue to Rose Period. He focused more on circus figures. He loved to use sheds of pink and red. In 1906 his artist work darkened, and they started to become heavier than usual. That is where he opted to join the 20th-century style of painting that used geometrical shapes-Cubism.

Pablo Picasso's mastery of art was far beyond his great masterpieces. When he joined Cubism, he established his set of work by solving other people’s problems till the 1950s. Even though his talent degraded after the World War I, he survived to the Titanic lane. Even though he came with his new styles of painting, The Museum of Modern Art in New York was called ‘the house that Pablo built.’ Reason being it was surrounded by his works from end to end.

In 1930 the MoMA’s Exhibition had over 15 Pablo’s paintings. He also influenced great artisans such as Alfred Barr’s in 1936 and Surrealism from 1936 to 1937. Around 1960s Pablo’s sense of touch began to fall off. But he was grateful for the time and energy he used to showcase his talent.

When it comes to the relationship, Pablo Picasso had several women whom he cherished like his paintings. In 1918 Pablo married Olga Khokhlova, a ballerina. They two had a son. In 1955 Olga died, and Pablo married Marie-Theresa Walter. They had a daughter. In 1961 he married Jacqueline Roque, and they were blessed with two children. On 8th April 1973 Pablo died in Mougins, France.