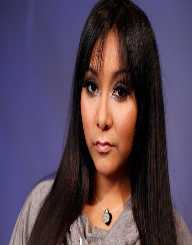 American reality television personality Nicole Elizabeth LaValle (née Polizzi) aka Snooki was born on November 23, 1987, in Santiago, Chile. Though she is not American by birth, she was adopted by an Italian-American couple Andy and Helen Polizzi when she was six years old. Snooki’s father Andy was a volunteer firefighter while her mother Helen was an office manager.

Growing up in the neighbourhoods of Marlboro, New Jersey, Nicole Snooki Polizzi attended the Marlboro High School. Nicole was a cheerleader in her school and was nicknamed ‘Snooki’ by her friends. After completing her formal education, she attended the community college where she studied to become a veterinary technician. During her childhood days, Snooki also suffered from a severe eating disorder.

The short-heighted, curvy-figured girl made her television debut with MTV’s show ‘Is She Going Out With Him?’. The concept of the show revolved around women who were in a relationship with men having despicable nature. Post her debut; she was cast in MTV’s reality show ‘Jersey Shore.’ The casting director of the show Josh Allouche spotted Snooki and thought her to be the perfect fit for the show. The show premiered on December 3, 2009, and made Snooki an overnight star.

The show was a major hit and became the highest-rated show in the history of the network. Snooki emerged as the breakout star of the show, and it ran for a total of six seasons with Snooki being a part of the cast in each season. The last episode of the show aired on 20th December 2012. This show not only gave Snooki immense popularity, but it also made her one of the highest-paid reality television celebrities earning around $150,000 per episode for the fifth season of the show.

Post her stint as a guidette in the show Jersey Shore, Nicole Snooki Polizzi inked a deal for appearing in a spin-off show titled ‘Snooki & Jwoww.’ The show also featured her Jersey Shore costar, Jennifer Farley. It was premiered on MTV in June 2012. ‘Snooki & Jwoww’ showcased the close friendship between Snooki and Jennifer and their respective lives. Apart from being a cast member on these shows, she has also anchored many awards and TV shows like CMT Music Awards (2010) and MTV's Club New Year's Eve 2013.

Nicole Snooki Polizzi made guest appearances in shows and award functions such as the Cake Boss episode on TLC titled ‘Snookie, Super Anthony & a Ship,’ MTV Video Music Awards (2010) and MTV Europe Music Awards that took place in Madrid, Spain in the year 2010. She has also been a part of many talks shows as ‘Jimmy Kimmel Live!’, ‘The Ellen DeGeneres Show,’ ‘Late Show with David Letterman,’ ‘The Wendy Williams Show and The View. One of her latest projects saw her as a contestant on ‘The New Celebrity Apprentice’ hosted by Arnold Schwarzenegger.

Snooki has also tried her hand at dancing. She was a participant in the 17th season of the dancing reality show ‘Dancing with the Stars.’ For the show, she partnered with newcomer Australian professional dancer Sasha Farber. The two ranked 8th on the show and were eliminated on October 28, 2013. Her talents are not just restricted to television and dancing. She is a professional wrestler as well and has made an appearance as a guest hostess on WWE Monday Night Raw. Snooki partnered with professional wrestlers Trish Stratus and John Morrison and defeated the women's professional wrestling tag team LayCool in a Mixed Tag Team match of Wrestlemania 27. In 2011, she was conferred with the ‘WWE 2011 A-Lister of the Year Slammy Award’.

Nicole Snooki Polizzi has also authored several books viz. ‘Confessions of a Guidette’ (2011), ‘A Shore Thing’ (2011), ‘Gorilla Beach’ (2012) and ‘Baby Bumps.’ Her novel ‘A Shore thing’ became a New York Times best-seller by selling over 9000 copies within the first month of its release. She sells her brand of merchandises that includes fragrances, fashion accessories, beauty products and many more.

Nicole Snooki Polizzi has been controversy's favorite child and has garnered public disdain with her antics on the show ‘Jersey Shore.’ She, however, continues to have a strange appeal and connect with her audiences. On July 30, 2010, Snooki was punched in the face by a gym teacher named Brad Ferro, while shooting for ‘Jersey Shore’ at Seaside Heights, New Jersey. She was arrested on charges of disorderly conduct and peace disturbance but was later released with a penalty of $500 and community service.

In the following year, her car collided with a parked police vehicle and hence, Nicole Snooki Polizzi was again apprehended by the local police in Florence, Italy. She was released after a brief interrogation. By the end of 2011, Snooki got involved in a legal battle after she sued the company SRG Ventures for a breach of contract.

Nicole Snooki Polizzi, who created a rage in the American entertainment world with her wild acts and high-end fashion style, announced her engagement with the producer of ‘Jersey Shore’ Jionni LaValle in March 2012. In the same year, Snooki’s first child Lorenzo Dominic LaValle was born. She gave birth to their second child Giovanna Marie LaValle on September 26, 2014. The two tied the nuptial knot on November 29, 2014. Recently, in October 2016, Snooki hit the headlines when she underwent a breast augmentation surgery. She currently stays in Florham Park, New Jersey.