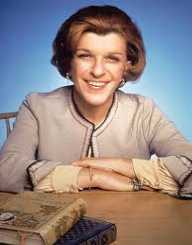 Nancy Walker was an American film, television, and stage actress best known for her roles as the smart and alcoholic housekeeper Mildred in McMillan & Wife Pierce and as Ida Morgenstern in The Mary Tyler Moore Show. Although she was a bit part character here, she reprised the role of Ida in the spin-off series Rhoda where she had a much more meaty part.

Nancy Walker was born on 10th May 1922 in Philadelphia. Her father was vaudevillian Dewey Barto, who was a part of the comedy dance team of Barto and Mann. The comedy was in her genes, and her tiny frame ensured she was typecast for such roles only.

George Abbott handpicked Nancy Walker and gave her the big Broadway debut in 1941 in Best Foot Forward. Metro-Goldwyn-Meyer immediately turned it into a movie following the show’s success, and Nancy starred alongside Lucille Ball.

The film offers started pouring in, and she starred in the musical Girl Crazy alongside Mickey Rooney and Judy Garland. After her contract with MGM ended, Nancy worked in several TV and Broadway musicals, most notably On the Town, Phoenix ’55 and Do Re Mi.

While Nancy Walker struggled for roles in the 50s and early 60s, she got some popularity from a series of Bounty paper-towel commercial. In 1970, she got a small role in The Mary Tyler Moore Show as the mother of the character Rhoda Morgenstern, which was played by Valerie Harper.

The show struck the right chord with the audience, and Walker guest starred in it for the next three years. The episode "Support Your Local Mother” bagged an Emmy for Outstanding Writing Achievement in a Comedy Series.

The spin-off Rhoda had Nancy Walker as a regular cast member. The series won two Golden Globes, and two Emmy awards and Nancy’s enactment of an overprotective and pompous Jewish mother earned her plaudits from the audience and the critics.

Roundabout the same time, she got a role alongside the ‘heartthrob’ of Hollywood Golden Age, Rock Hudson, in Mcmillan & Wife. She played the housekeeper Mildred. After dabbling in both CBS and NBC series, in 1976, ABC-TV offered Nancy a contract to start her series, The Nancy Walker Show. But bad reviews and minimal viewership meant the show was called off a few months later.

Nancy Walker later moved into stage and film directing. She directed some episodes of both The Mary Tyler Moore Show and Rhoda, CBS sitcom Alice and the musical film Can’t Stop the Music in 1980. The movie was panned by the critics and was nominated for many Razzie awards. Nancy was nominated for 8 Emmys and 4 Golden Globe awards for Best Supporting Actress.

Nancy Walker had a daughter named Miranda from her second marriage. She married twice. Her second husband David Craig outlived her. It is believed that Nancy was a very close friend of Montgomery Clift. During the filming of Fox’s True Colors, Nancy fell ill and was diagnosed with terminal lung cancer. Nancy Walker passed away on 25th March 1992 at the age of 69.