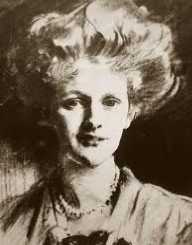 Nancy Astor was born on the 19 May 1879 to Chiswell Dabney Langhorne and Nancy Witcher Keene in Danville, Virginia. Her family was socially well-connected and wealthy, although during her childhood her father’s wealth had been compromised and he had to rebuild his fortune. Once he had done so, the family lived in a large house, Micador in Virginia, where Nancy Astor was raised. She was one of eleven children, having four sisters and six brothers. One sister, Mary, died in infancy. The Langhorne girls were noted for their good looks. Astor’s sister Irene married the American artist Charles Dana Gibson, who was responsible for creating the Gibson Girl images.

Nancy Astor had some high school education and then spent time at a finishing school in New York City which she did not enjoy. She often referred to her lack of formal education in later political speeches.

At the age of eighteen in 1897, Nancy Astor married Robert Gould Shaw II and had one child, a son Robert. The marriage did not last long, and the couple divorced in 1903 and Astor won custody of her son. At her father’s suggestion Astor traveled to England and onboard the boat to the UK, she met Waldorf Astor who fell in love with her. The couple married in London in 1906. She was twenty-six at the time, and her husband-to-be was heir to the Astor fortune. As a wedding present, her father-in-law presented the young couple with the stately home, Cliveden in Buckinghamshire. The Astors had Cliveden renovated and modernized, and their home became a meeting place for the socially and politically prominent. Astor became one of the premier hostesses of her generation and was the center of what became known as the Cliveden Set. Guests included Winston Churchill, Oswald Mosley, George Bernard Shaw, Henry Ford, and Gandhi.

During WW I, Cliveden was used as a hospital for the Canadian military, and Astor was involved in the war effort at the stately home. Again in WW II Cliveden served as a medical center for Canadian troops.

In 1919, Nancy Astor father-in-law Waldorf Astor’s father. Her husband ascended to the peerage and had vacated his seat in the House of Commons. Nancy Astor had proved to be a good political campaigner on behalf of her husband was encouraged to run for the seat his seat.

Nancy Astor went on to win seven consecutive elections and was a member of parliament from 1919 until 1945. Her maiden speech focused on temperance and later she was responsible for instigating the lifting of the legal age for alcohol consumption to eighteen.

In 1944, when she was sixty-five years of age, announced that she was leaving politics and would not be contesting her seat at the next election.

Nancy Astor converted to Christian Science when she was an adult.

The Astors donated Cliveden to the National Trust in 1942. After William Astor III died in 1968, the Astors no longer resided at Cliveden. Presently Cliveden is leased by London & Regional Properties and is run as a luxury hotel.

Nancy Astor was often criticised for making anti-Semitic and anti-Catholic remarks. She fell out with one of her sons when he married a Catholic and refused to attend his wedding. He retaliated but telling her he would not be attending her funeral. She was pro-appeasement towards Hitler in WW II. There was a suspicion that she was pro-Nazi, but after the war when a Gestapo list of 2,300 prominent people to be arrested after a successful German invasion of the UK, Astor’s name was on the list.