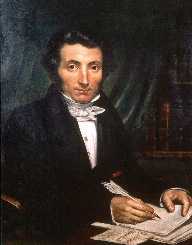 Mungo Park was born on September 11, 1771. He was a Scottish explorer. He attempted to explore the correct course of the Niger River. He died in the course of finding the true source of River Niger.

Mungo Park was born on September 11, 1771, in Selkirkshire, Scotland. He was born into a well to do farming family. He was educated at home before he was enrolled at Selkirk Grammar School. He was an intelligent boy, and he had an interest in the natural sciences. When he was fourteen, he was apprenticed to Thomas Anderson. Thomas Anderson was a surgeon. In 1788, Park enrolled at the University of Edinburgh where he studied medicine and botany. In 1791, he completed his studies.

In 1791, through his relationship with naturalist and botanist, Sir Joseph Banks Mungo Park became an assistant surgeon on board the East India Company’s Ship ‘Worcester.’ In 1793, he sailed with the crew to Benkulen in Sumatra. While there he studied the local flora and fauna. In 1974, when he returned home, he gave a lecture to the Linnaean Society. In his address, he described eight new Sumatran fish and rare Sumatran plants. The trip made Park more drawn to exploration. The African association needed someone who would be the successor to Major Daniel Houghton.

In 1970, Major Daniel had been sent to discover the course of the Niger River, but he died in the Sahara. Mungo Park was recommended for the position by Sir Joseph Banks. In 1795, he began his exploration at the mouth of the Gambia River. In the same year, he began exploring the unknown interiors with the aid of two local guides. He was imprisoned by a Moorish chief, but he escaped in 1796 with a horse and a pocket compass. In the same year, he became the first European to reach the Niger River at Segou. He followed the River for eighty miles, but he was forced to stop because his resources had depleted.

Mungo Park decided to return home using a different route where he kept close to the Niger River. He traced the course of the river to Bamako. He later fell ill at Kamalia, but a man took him in and let him stay at his place for seven months. In 1797, when he had recovered, he made his way back to Pisania. He returned to Scotland the same year. In 1799, his work ‘Travels in the Interior Districts of Africa’ was published. The book was an account of his expedition. He later began practicing as a physician in Scotland. The government then invited him to lead another team to the Niger.

In 1805, Mungo Park started the expedition by sailing from Portsmouth for the Gambia. As the lead, he led a party of around forty men. The journey was difficult and challenging as several men died en route because of illnesses such as fever and other diseases. The expedition reached Niger in August the same year with only eleven men alive. Later information reached Scotland that the eleven survivors also succumbed in the expedition.

In 1799, Mungo Park married Allison. He died in 1806 after he and his men were attacked by local inhabitants at Bussa and drowned. The Mungo Park medal was founded by the Royal Scottish Geographical Society in his honour in recognition of his outstanding contributions to the geographical knowledge through exploration.