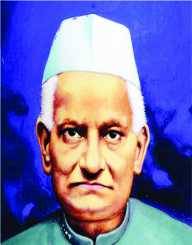 Motilal Nehru was an Indian politician, lawyer, and activist.

Motilal Nehru was born in the city of Agra, British India, on May 6, 1861. His father, Gangadhar, was the chief of police in Delhi. He died before his son was born. His mother’s name was Jeevarani. He had several brothers and sisters. He studied at the Muir Central College in Allahabad and at the University of Cambridge.

In 1883, Nehru started working as a lawyer in Kanpur. Three years later, he continued his work in Allahabad. He became very successful, with many clients who belonged to wealthy families. He frequently went to Europe and he was a part of the Privy Council of Great Britain.

Nehru became involved in politics as a member of the Congress Party. He was influenced by Mahatma Gandhi and he adopted a simpler lifestyle. In 1919, he served as the President of the Congress Party in Amritsar. That same year, he founded his own radical newspaper, called The Independent. In 1921, the British arrested him and he spent six months in jail. In 1923, he helped in the founding of the Swaraj Party. He was part of the Legislative Council of the United Provinces and the Central Legislative Assembly of British India.

In 1928, he served as President of the Congress Party in Calcutta. That same year, he wrote the Nehru Report. It was a constitution for India as a more independent country within the British Empire. It was rejected by the British, by the Muslims in India, and by those who wanted complete independence. In 1930, he took part in the civil disobedience, as a part of Gandhi’s Salt March. He was soon released because of his declining health.

From a young age, Nehru financially supported his extended family, including many of his nieces and nephews. His first wife died during his childbirth. His second wife was a woman named Swaruprani Thussu. He had three children with her. His son, Jawaharlal Nehru, became the first Prime Minister of India. His older daughter, Vijaya Lakshmi Pandit, was a diplomat who served as the President of the U. N. General Assembly. His younger daughter, Krishna Hutheesing, was a writer. Nehru was the patriarch of the Nehru-Gandhi family, the most powerful political dynasty in India. His descendants still assume powerful positions in the Indian government.