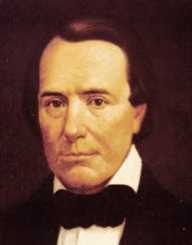 Mirabeau Lamar is an American politician who served as the state of Texas' second president and as its first vice president. He died on December 19, 1859, from suffering a heart attack in his Richmond plantation in Texas.

Mirabeau Lamar married two women in his life. His first marriage was in 1826 to Tabitha Burwell Jordan who he met when he toured Georgia as a representative of the states' governor. They had a daughter together named Rebecca Ann. The couple's marriage was cut short when Jordan died four years later in 1830 from suffering tuberculosis. His second marriage was to a woman named Henrietta Maffitt.

Born on August 16, 1798, in Louisville, Georgia as Mirabeau Buonaparte Lamar, he was one of two sons of Rebecca and John Lamar. His father owned a cotton plantation in Milledgeville, where he spent most of his childhood. He had a brother named Lucius who committed suicide back in 1834.

Being brought up to a well-to-do family, he had access to education and developed a fondness for reading as a young child. He attended a local school in Eatonton and Milledgeville for his early education and was also active in sports and other extracurricular activities. If not found with his nose buried in a book, the young Lamar was either writing poetry, painting in oils, horseback riding, or fencing.

For his excellence, Mirabeau Lamar was admitted to Princeton College but opted to pursue business instead. His first business venture was a joint one for Cahawba Press in 1821, a publication which ended up as a failure.

Lamar and the World of Politics

Shortly after, Mirabeau Lamar came to be employed under then-Governor George M. Troup's administration. He served as Troup's spokesperson and toured Georgia on behalf of the governor. While working under Troup, he met and married his first wife. In 1828, Lamar moved his family in Columbus, Georgia after Troup lost his reelection bid. In Georgia, he established a new publication which was far successful compared to his previous venture: the Columbus Enquirer.

However, shortly after relocating to Georgia, his wife died, which led him into a depressed state. As a means of moving on, he traveled, and after, he chose to study and entered law school.

In 1834, Mirabeau Lamar suffered another tragedy in his life: when his brother committed suicide. Again plagued with grief, he decided to travel where he ultimately ended up in Texas a year later in 1835. He ventured for a bit in selected parts of Mexico.

At the time, there was a brewing war between Texas and Mexico. In 1836, he decided to join Sam Houston's army and became well-known at the Battle of San Jacinto where he rescued two Texans from peril. Shortly after the war, Texas finally broke free from Mexico and Lamar was appointed as Secretary of War in 1836.

Lamar as the State of Texas' President

On December 1, 1838, Mirabeau Lamar was sworn in as the second President of Texas and was hailed as the only representative of the Democratic Party. As president, one of the first activities he did is the proposal of the establishment of a national bank that will secure loans both from Europe or America. He stated his intense desire for Texas to gain favorable impressions from Europe, the opposition to potential annexation to America, and the driving out of the Native Americans, particularly the Comanche and Apache tribes from their homeland, even if it means destroying the whole tribe. All of these were stated in his first formal address.

He executed the first of these manifestos in 1839 when he ordered the attack on the Indian tribes. Lamar had a firm belief that it was necessary for them to wipe out the whole Indian tribe to fully occupy the land.

Mirabeau Lamar ordered then-Secretary of War Albert Sydney Johnston and General Thomas J. Rusk to drive the Indians from the land which took place in the Battle of the Neches where 500 fully-armed Texan soldiers attacked 800 Indians. Half of the number of Indians consisted of women, children, and older people and were greatly unarmed.

The same year in 1839, Lamar established the Texas State Library (now known as the Texas State Library and Archives Commission). He also dispatched three emissaries to Belgium, France, and Great Britain for them to recognize Texas but all three failed. Aside from that, he provided land provisions for school development, which dubbed him as the "Father of Texas Education." Two of these establishments came to fruition; the Texas A&M University in 1876 and the University of Texas in 1883.