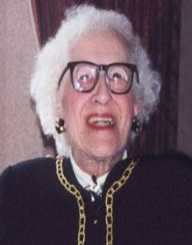 Eliza Gladys Millvina Dean was born 2nd February 1912, to Bertram and Georgette Dean. She was born in Branscombe, Devon, in England, and had an older brother named Bertram. When Dean was just two months old, her parents decided the family would move to Wichita, Kansas in the United States. Her father had family there, and he was going to go into business with his cousin who owned a tobacco shop.

The family had been booked on another ship, but they were transferred to the Titanic at the last moment, classified as third-class passengers. On the night of the collision, her father went to investigate after feeling the crash, and when he came back, he made his wife dress the children and go up on deck straight away. Due to her quick-thinking father, Dean, her brother, and her mother made it safely into a lifeboat and survived the ordeal.

Millvina Dean's father was either not found, or his body not identified. Although Dean’s mother knew her husband had wanted to start a new life for the family in the U.S., being faced with raising two young children on her own, she took her family back to England. They settled in Southampton, which is where Dean attended school, including The Gregg School.

When Dean was eight years of age, her mother was getting ready to re-marry, and it was at this time that Dean found out she was a survivor of the Titanic tragedy.

During the Second World War, Millvina Dean worked for the government. When the war was finished, she held several positions over the years, including, cartographer and secretary. She did not start participating in events related to the Titanic until she was in her 70s. She took part in exhibitions, and conventions, as well as appearing in television interviews and documentaries.

In 1998, there was a Titanic convention held in Massachusetts that she attended. Dean became the last survivor of the Titanic tragedy in October 2007. In April 2008, at the age of 96, Millvina Dean was invited to speak in Southampton at an event to commemorate the 96th anniversary of the Titanic sinking. Unfortunately, although she accepted, she had to cancel at the last moment due to ill health.

Dean broke her hip, and she sold some of her Titanic memorabilia to pay for her medical care. She raised around 32,000 pounds, but two months later she decided to sell more of her items as she couldn’t afford her ongoing medical expenses. Dean died on 31st May 2009 of pneumonia.

Millvina Dean never married and didn’t have any children.

The Belfast, British and International Titanic Societies established The Millvina Fund in April 2009. The purpose of the fund was to pay the expenses for the nursing home that Dean lived in. The fund was championed by Don Mullan, an Irish author, and journalist. He featured a portrait of Dean at his photographic exhibition in Dublin in 2009.

He released a limited-edition photo he had taken of Millvina Dean's hands as she signed a card for an autograph collector. Mullan then challenged major players such as James Cameron, Leonardo DiCaprio, Kate Winslet, Celine Dion, Sony Music, 20th Century Fox and Paramount Pictures, who had all been involved with the movie Titanic in 1997, to support contributions that were made.