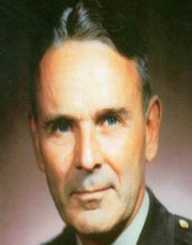 Maxwell Davenport "Max" Taylor was born on August 26th, in 1901. He served the U.S. as a diplomat and an army officer. He earned recognition during the world II as he commanded the 101st Airborne Division. This division was known as “The Screaming Eagles.” Later on, President John Kennedy appointed him to chair the Joint Chiefs of Staff.

Maxwell D. Taylor was born on August 26th, in 1901. His birthplace was in Keytesville, Missouri. However, his parents later raised him in Kansas City.

Maxwell D. Taylor joined Northeast High School before later joining the Kansas City Polytechnic Institute. Subsequently, he took the Congressional exams in 1918 and was appointed to join the U.S Naval Academy or the U.S Military Academy. He completed his studies at West Point in 1922. After this, he went to serve as a second lieutenant.

Maxwell D. Taylor tied the knot to Lydia Gardner Happer. Together, the two had two sons in their marriage. They named their first-born son John Maxwell Taylor. Thomas Happer Taylor, their second born son, grew up to become a highly recognized army officer.