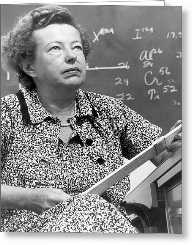 Maria Goeppert Mayer was born on June 28, 1906. She was an American theoretical physicist. She won a Nobel Prize in Physic for proposing the nuclear shell model of the atomic nucleus. She was the second female Nobel Laureate in physics. She is famously known for her research in nuclear physics.

Maria G. Mayer was born on June 28, 1906, in Kattowitz, Prussia. She was born to Maria Wolf Goeppert and Friedrich Goeppert who was a professor of paediatrics at Georgia Augusta University located in Gottingen. She attended Hohere Technische in Gottingen which was a school for girls. In 1921, she joined Fraunstudium which was a school that prepared girls for university entrance examinations. In 1924, she joined the University of Gottingen where she studied mathematics. She later developed an interest in Physics and enrolled in the PhD program at the University. In 1930, she proposed the theory of two photon absorption by atoms in her thesis.

After she finished her Ph.D., she moved with her husband to the United States of America. In the United States, her husband became an associate professor of chemistry at Johns Hopkins University. Maria G. Mayer also taught occasional courses in the University in the Chemistry Department. In 1930, she began collaborating with her husband and physicist Karl F. Herzfeld in the fields of chemical physics and physical chemistry. They collaborated until 1939. In 1949, she made important research in her paper on how chemical structure determines optical properties. In 1939, her work in the analysis of the spectra of complex systems based on the Hund-Mulliken approximation was elaborated.

In 1940, she published the textbook ‘Statistical Mechanics’ in collaboration with her husband. The textbook was about the quantum mechanical basis of statistical mechanics to chemists. During World War II, she joined Harold Urey’s Group which was known as the Substitute Alloys Materials Laboratory. She joined the group in order to solve the problem of isotope separation for the Manhattan Project. In 1945, she became a voluntary associate professor at the University of Chicago. The following year she became a part-time research Physicist in the theoretical division of the new Argonne National Laboratory. In 1947, she started her research on the isotopic abundances.

In 1948, she published her results in a paper titled ‘On Closed Shells in Nuclei.’ In the paper, she made a conclusion that nucleons occupy separate energy levels in the nucleus. In 1955, she published the textbook ‘Elementary Theory of Nuclear Shell Structure’ in collaboration with Hans Jensen. In 1965, she was invited as a guest of honor at Women’s Week in Japan. In the following two years, she was a guest lecturer in India.

In 1963 she won the Nobel Prize in Physics jointly with Hans Jensen and Eugene Wigner for their discoveries concerning nuclear shell structure.  She also received honorary degrees of Doctor of Science from Smith College, Mount Holyoke College, and Russel Sage College.

In 1930, Maria G. Mayer got married to Joseph Edward Mayer with whom she had two children, Maria Ann and Peter Conrad. She died on February 20, 1972, in San Diego, California of a stroke. Her remains were buried at El Camino Memorial Park in San Diego. In 2011, she was included in the 3rd issue of the American Scientists; Compilation of US postage stamps.