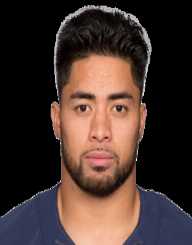 American footballer Manti Te’o was born on the 26 January 1991 in Laie, Honolulu County in Hawaii. His parents were Brian and Ottilia Te’o, and he is of Samoan heritage. His father Brian was the local school football coach.

Manti Te’o was a pupil at the Punahou School, the former school of President Barack Obama.

During his school years, Manti Te’o became one of the most highly decorated high school athletes in the history of his state, Hawaii. He was named the Gatorade State High School Player of the Year twice. During this time, Te'o led his school to its first state title. Because of his ability and number one ranking defensive prospect, he received many college offers and chose the University of Notre Dame.

Manti Te’o subsequently excelled as an American college football player as a linebacker for the University of Notre Dame. Then in September 2012, it was announced that his grandmother had died. The same day, it was said that his girlfriend had died. These deaths resulted in national coverage and an outpouring of sympathy for the young football star. He continued playing, and his winning team was ranked number one.

Manti Te’o himself won some awards and finished second in the Heisman Trophy competition. In January 2013 the team suffered a big loss to Alabama in the BCS Championships, losing 42-1. This was shortly after the hoax had been discovered.

After the 2011 season, Manti Te’o decided to stay with Notre Dame rather than turn professional at that stage. At the end of the 2012 college football season, he signed with agent Tom Condon and began training at the IMG Academy in Bradenton, Florida to prepare for the NFL Draft.

The San Diego Chargers selected Manti Te'o for the 2013 season. He became the highest selected Notre Dame linebacker since 1993, signing a four-year contract. The deal he signed was worth over $5 million. Te’o injured his right foot on two occasions and after the second injury was sidelined for most of the season. (Season statistics: 61 tackles & 4 passes defended in 13 games started).

In 2014 fractured his foot in September of that year. He returned mid-season against the Oakland Raiders. He earned his first NFL sack against the San Francisco 49ers. Season 14 statistics: 61 tackles, 1 sack, 1 interception & 3 passes). Season 15: 63 tackles, one interception, and one forced fumble. Missed four games due to an injury.

In September 2016 Manti Te’o became a San Diego Chargers team. In 2017 he signed a two-year contract with the New Orleans Saints

Manti Te’o is unmarried. He has five sisters, and he is a member of The Church of Jesus of the Latter-Day Saints, the Mormon faith.

Manti Te’o claimed to have a girlfriend, Stanford student Lenay Kekua who died of leukemia. This was exposed as an elaborate hoax when Deadspin accused Te’o of lying on the 16 January 2013. Te’o claimed that it had been an online relationship and that he had lied about meeting Kekua. It turned out that the hoax had been carried out by Ronaiah Tuiasosopo from California using a fake online identity.

Manti Te’o discovered in December 2012 that he had been the victim of Tuiasosopo and other people came forward with similar stories regarding Tuiasosopo.