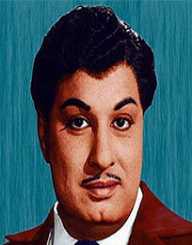 M.G. Ramachandran best known as M.G.R was Indian politician, filmmaker, and actor. Born on January 17, 1917, he was the Chief Minister of Tamil Nadu from 1977 to 1987. MGR became a cultural icon in the Indian state of Tamil Nadu for his incredible work during his service.  M. G. Ramachandran has considered one of the leading actors of the Tamil film industry, and his popularity among the people earned him the alias “Makkal Thilagam” (People's King).MGR started his acting career with his elder brother M.G Chakrapani, by joining a drama troupe to earn money in support of their family.

M G Ramachandran acted in plays for some years before making a film debut playing a supporting role in Sathi Leelavathi in 1936. His ever-improving skills and talent during this stage gained his a lead role in the 1940s and since dominated the Tamil Film Industry. As a politician, he joined the Indian National Congress as he was inspired by the Gandhian ideals. M G Ramachandran later joined the Dravida Munnetra Kazhagam (DMK) led by C.N Annadurai, where his fame in the film industry made him rose through the ranks into leadership within a short time. MGR left the DMK after the death of Annadurei in 1972 to form the All India Anna Dravida Munnetra Kazhagam (AIADMK). In 1977, AIADMK formed an alliance with other political parties to win that year’s election.

M. G. Ramachandran was born to Melakkath Gopala Menon and Maruthur Satyabhama on January 17, 1917, in Kandy, Sri Lanka. M. G. Ramachandran was very religious growing up, and as a devout Hindu,  M G Ramachandran was a devotee of Murugan and the favorite god of his mother, guruvayoorappan. His religious ideology changed after he joined the Dravida Munnetra Kazhagam (DMK), a pro-rationalist party and followed their rationalist ideology. This scenario seemed to have changed after he left the DMK to form his own party as he usually asked his supporters to pray for the party.

M. G. Ramachandran started his acting career by joining a drama troupe and acting in dramas just to earn money to supplement that of his family. After some years in acting in dramas,  M G Ramachandran made a film debut in Ellis Dungan’s Sathi Leelavathi in 1936. M. G. Ramachandran acted in several other films being it action or romantic but had a breakthrough in the film Manthiri Kumari in 1950, written by M. Karunanidhi.  M. G. Ramachandran gained intense popularity with his role in Malakkallan in 1954. In Alibabavum 40 Thirudargalum in 1955, MGM acted as a superhero, and that was the ever Gevacolor movie of the Tamil film industry.

M G Ramachandran gained intense popularity with films like Thirudadhe, Enga Veettu Pillai, Aayirathil Oruvan, Anbe Vaa Mahadevi, Panam Padaithavan, Ulagam Sutrum Vaalibhan among many others. In 1972,  M G Ramachandran won the National Film Award for Best Actor for the film Rickshawkaran. His blockbuster film, Ulagam Sutrum Vaalibhan in 1973 broke the box office record of his previous films. The film, which was shot in Malaysia, Singapore, Thailand, Japan and Hong Kong, was one of the few short abroad within that period. MGR’s last film was Ullagam Suthi Paru in 1987, despite being diagnosed with kidney failure.

On January 12, 1967, actor and politician M.R Radha shot MRG twice in his left ear and afterward tried to shoot himself. Radha who was also a producer had visited MRG in his house to discuss a future film project that day. He suddenly stood up and shot MGR. Radha and MGR had been acting together for about 25 years before the incident, and the last film they shot together was Patralthaan Pillaya.

M G Ramachandran was operated upon and since then had hearing impairment in the left ear and a change in voice. As the news of the shooting broke, about 50,000 of MGR fans gathered in front of the hospital where he was taken. Even at the hospital, MGR received an advance payment from Sinnappa Devar for a future film during his visit to MGR at the hospital.

M. G. Ramachandran started his political career by joining the Indian National Congress Party until he left in 1953. He then joined the Dravida Munnetra Kazhagam (DMK) led by C.N Annadurai. His activities within the party made him a vocal Tamil and as radical Dravidian and became a leading member of the party. In 1962,  M G Ramachandran rose to become a member of the state Legislative Council. In 1967,  M G Ramachandran was elected a member of the Tamil Nadu Legislative Assembly. MGRwas appointed the treasurer of DMK after the death of Annadurai in 1969.

M. G. Ramachandran saw his political advancement was under threat when the leader of DMK, Karunanidhi began to project his son, M.K Muthu IN 1972. MGR saw this move as a move by Karunanidhi to curtail his political career.  M. G. Ramachandran then started to make claims of corruption against the party leadership and demanded the financial details of the party are published publicly and that upset DMK leadership leading to him being expelled.

The first election contested by the AIADMK was in the 1977 parliamentary and assembly elections in Tamil Nadu. In many of this, the AIADMK formed alliances with other political parties. During the parliamentary elections, the party won 144 out of the 234 seats and went ahead to win the state elections.  M. G. Ramachandran, therefore, became the Chief Minister of Tamil Nadu on June 30, 1977. This made him the first actor to become a Chief Minister of India.  M. G. Ramachandran held the position until his death in 1987. The party went on to be victorious in subsequent elections.

As a chief minister of Tamil Nadu, M G Ramachandran much focused on education and other social developments. He upgraded the Midday Meal Scheme introduced by Chief Minister and kingmaker, K Kamaraj into the "MGR's Nutritious Meal Scheme" in feeding less privileged children and encourage children in attending school. The scheme, which started in 1984, benefitted over 120,000 children at the cost of Rs. 1 billion. Other policies include the introduction of Women special buses, ban on liquor in the state and the renovating of old temples, which at the end boosted tourism.

M. G. Ramachandran was married thrice, first to Chitarikulam Bargavi best known as Thangamani who died after falling ill for some time.  M. G. Ramachandran then married his Sathanandavathhi who died of tuberculosis soon after their marriage. His third marriage was to the former Tamil film actor V.N Janaki in 1965. Janaki was married to Ganapati Bhatt and left him to marry M.G.R. On October 31, 1984,  M G Ramachandran was diagnosed with kidney failure and was sent to the Downstate Medical Centre, Brooklyn in the United States of America, where he underwent a kidney transplant.

M G Ramachandran died on December 24, 1987, at his residence, Ramavaram Gardens in Manapakkam. The announcement of his death led to intermittent riots and looting with cinemas and shops mostly targeted. This continued even at his funeral and resulted in 29 death with 47 police personnel injured. His death also led to 30 followers committing suicide and others having their heads tonsured.