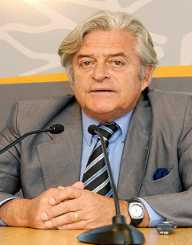 Luis Alberto Lacalle was born on July 13, 1941. He is an Uruguayan politician and lawyer. He served as the President of Uruguay from 1990 to 1995. He comes from a family background of politicians. His passion for politics started while he was still young. While he was so interested in politics, he was also in love with law that he took law and graduated with and LL.B Degree. He was once elected as the Deputy of Montevideo. As president, he did not hesitate to try and stabilize the economy of the country after a coup that dissolved the parliament.

Luis Alberto Lacalle was born on July 13, 1941, in Montevideo, Uruguay. He was born to Carlos Pedro Lacalle and Maria Hortensia. Maria was the daughter of the famous political leader, Luis Alberto de Herrera. He was brought up alongside his sister, Agnes. Luis joined the National Party when he was only seventeen. He was so interested in politics as he had grown up in a political family. He was at his grandfather’s (Alberto Herrera) side during his campaigns for the 1958 elections. He loved writing, and in 1961 he became a journalist for ‘Clarin’ where he wrote columns on political issues. He also wanted to become a lawyer, and so he enrolled at the University of the Republic’s Law School. He graduated from the school in 1964 with an LL.B Degree.

In 1971, he was elected the deputy of Montevideo when he entered politics. Luis Alberto held the position until 1973. In 1973, there was a coup that was held by President Juan Maria which dissolved the parliament. The National Security Council was formed, and it led the military rule. Luis believed in democracy and was opposed to the dictatorship that was taking place in Uruguay. After the coup, he was arrested and jailed for some weeks because of his opinions. He was later on released, and he got involved in political activism that opposed military rule. In 1981, he got a job as a guest columnist for the weekly ‘Courier Friday and Review.’ He led his own program ‘Country and Party’ as a broadcast journalist on the Radio Carve of Montevideo. In 1981, he formed and became the Secretary General of the National Council Herrerista which was under the White Party.

In 1982, he became a member of the Board of the Party. In 1984, democracy was restored in Uruguay. Luis was elected as Tor, and later on, he was appointed the Vice President of the Senate. In 1989, he ran for the presidency, and he won. He assumed the office of the President on March 1, 1990. He served as president for five years. In his capacity as president, he made reforms that would lead to the economic growth and stability of the nation. One of his reforms that included a plan to privatize Uruguay’s state owned companies was rejected by a referendum. His term as president ended on March 1, 1995.