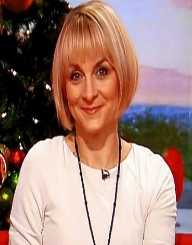 Louise Minchin also was known as Louise Mary Grayson is a British journalist and a BBC news anchor. She has worked with the station for sixteen years where she has served as an anchor for various news shows and a relief presenter in the absence of her colleagues. She is well-known for anchoring the BBC program ‘Breakfast’ since 2006. Other famous shows include ‘Real Rescues’ (2009-2012), ‘The One Show’ and the ‘2016 FIFA World Cup’.

Louise Minchin was born in British Hong Kong on September 8, 1968. Her father served in the British Army as the Major of the Irish Guards. She attended her primary school at St. Mary’s School in England and later attained a degree in Spanish from the University of St Andrews. Subsequently, she joined the London College of Communication where she studied journalism.

Louise Minchin started working for the Radio 5 Live in 1998, where she presented many of the station’s programs such as 'Drive and Breakfast.' Notably, the Station was a national radio initiative of British Broadcasting Television. Later from September 2003 to April 2012, she worked regularly alongside Jon Sopel from 7 pm to 10 pm, presenting the BBC news.  Minchin also presented the 2 pm to 5 pm slot with Emily Maitlis.

Additionally,  in 2006-2007, she hosted the relief news on BBC Breakfast covering for Sian Williams alongside co-presenter Kate Silverton. Remarkably, even after Williams return, she continued to co-host the weekend program from July 2010 to April 2012. On April 1, 2012, she presented her first edition of the BBC Breakfast alongside Bill Turnbull and Charlie Stayt after BBC announced she would replace Williams as the main presenter in 2010.

From April 21, 2008, Louise Minchin started presenting a weekday program called Missing Live alongside Rav Wilding. This program ran for four weeks after BBC Breakfast at 9:15 am. The show returned highlighting new cases and those previously featured for four weeks run from March 16, 2009, and later in March 2010. Earlier alongside Colin Jackson, she presented the Sunday morning show called Sunday Life in 2008 and then from November 2, 2009, she introduced Real Rescues alongside Nick Knowles.

During the 2004 Athens Olympics, she presented a BBC sports magazine program on Saturday mornings called 'In the Know' alongside co-presenter John Inverdale. In April 2010, she co-presented 'The One Show' alongside Chris Hollins and later in June 2010 alongside Matt Baker when the show returned for two weeks.

On March 12, 2012, Louise Minchin presented a documentary series 'Crime and Punishment' alongside a famous rugby player and presenter, Gethin Jones. During the same period, she acted as a relief presenter for the BBC News at One until April 2012. On this show, she served as a substitute alongside Sophie Raworth and Kate Silverton.

From November 2012, she co-presented with Peter Allen for the Radio 5 Lives' Drive program where she had replaced the original host Aasmah Mir. She often stands as the main presenter of BBC Radio 4’s daily consumer's program 'You and Yours.'

Louise Minchin is well known for being an anchor of the BBC 'Breakfast' since 2006 which she took complete charge in 2011 after the venue shifted to the City of Salford.

In 2014, Louise Minchin earned an award with an Honorary Doctor of Letters degree courtesy of the University of Chester.

Louise Minchin is also a qualified member, 45-49 age groups, of the 2015 Great Britain Age-Group Triathlon Team. On September 19, 2015, she competed at the World Triathlon Championships in Chicago which entailed 1500m swim, 4 km bike ride, and a 10km run. On June 15, 2015, she qualified as a team member of the Dambuster Triathlon at Rutland Water where she finished 71st out of 78 members. She is also a bike racing enthusiast and is an expert in water skiing where she has helped many fans in mastering the sport.

Other than her work as a BBC host, she supports charity such as the SOS Children’s Villages which provides a home for orphaned and abandoned children. She also supports the charity organization by participating in the annual World Orphan Week Campaign which takes place every February.

In 2009, she supported ‘Sense-National Deafblind and Rubella Association’ after interviewing Dave Hogan during the Deafblind Awareness Week. She also took part in ‘Around the World 80 days’ for the children in need. Currently, she supports the charity ‘Missing People’ which provides support for the missing children, vulnerable adults and families left in needy situations.

In 1998, Louise Minchin married David Minchin and the couple had two children; Mia and Scarlett Minchin. The family currently lives near Chester.