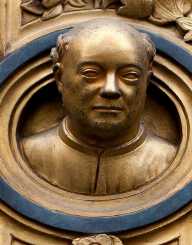 Moreover, Lorenzo got to attain his first commission at the age of 21 years. This was a tender age for one to consider hiring anyone in that era. Besides, there were many experienced artists at that time that could have done that work.

One of his greatest works was on the bronze doors of the Florence Baptistery. The doors are also famously known as the Gates of Paradise. In his youth, he got to train as a sculptor and a goldsmith. However, he later went ahead to dwell in the art of metal. Lorenzo was also a writer. He managed to write one of the famous books today called the Commentarii. The book talks about art in general but also about his life. Therefore, the book doubles as his autobiography.

The child Lorenzo di Cione Ghiberti was born in Pelago, in Florence in Italy, in the year 1378. Lorenzo was born to his parents Fiore Ghiberti and Cione di Ser Buonaccorso Ghiberti. Lorenzo came from a broken home because his mother Fiore left his father to live with another man Bartolo di Michele. Later his father, Cione died, so he moved to live with Bartolo. The man Bartolo grew fond of him, besides he was the only father he had left after his parents' marriage failed.

Also, Bartolo was an impeccable artist. Therefore, he got to learn his early trade from him. Later, Lorenzo got to learn the art of painting from Gherardo Starnina. To quench his thirst of learning new styles, Lorenzo went to continue his training in the shop of Bartoluccio di Michele in Florence. Sometime later, Florence came under attack of the bubonic plague. So, he left the city for Rimini. There he was so fortunate to land employment immediately at the house of Carlo Malatesta. This was the Lord of Pesaro.

Moreover, he got room to paint in, and most of the time he was just in there harnessing his skills. Lorenzo spent some time there, but he had to go back home sometime. So, when e had that there was a competition to work at the Baptistery, he left in 1401.

The work of the young Lorenzo took many by surprise at the competitions. Therefore, he landed the commission to work on the Florence Baptistery doors. Moreover, being the kind of genius artist he was, Lorenzo also got to perform miracles on the doors. There were the initial plans that were to display the Old Testament on the doors. However, the plans quickly changed and they settled for the New Testament. To be able to finish his commission, Lorenzo opted to open a big workshop.

In the workshop, many artists came to learn from the young genius Lorenzo.  Upon the completion of his first commission, Lorenzo received another commission. Lorenzo was to work on a new set of doors for the church in Florence. However, the church said that they wanted a depiction of the Old Testament. The work Lorenzo did was immaculate that they got named the Gates of Paradise by Michelangelo. The new sets of doors are still a monument to the considerable talents of Lorenzo.

When Lorenzo had done his work on the doors, he was some celebrity artist of that era. Also, commissions came flowing in from all corners including for the Pope. Later, Lorenzo and his team got another commission to work on the East door of the Florence Baptistery. The work took them over 27 years to complete. Also, the entries like the first one had ten panels showing the stories of the Old Testament. After that, he got to work on the statue of St. John the Baptist. Lorenzo got this commission from Arte di Calimala guild. This was one of the wealthiest unions in Florence at the time. The statue left many of the people in awe up to date.

Lorenzo Ghiberti met and fell in love with Marsila who was 16 years of age at the time. Also, she was the daughter of Bartolommeo di Lucca who was a comb-maker. Their union brought forth two sons Tommaso Ghiberti and Vittorio Ghiberti.

The great Lorenzo Ghiberti lived for 75 years till he met his death from fever Lorenzo died in his home town Florence. As per the surviving record, the family buried him on the 1st of Decmber1455 in Santa Croce.