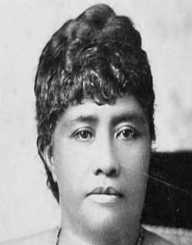 Liliuokalani was the queen of the Kingdom of Hawaii.

Lydia Liliu Loloku Walania Kamakaeha was born on the island of Oahu, on September 2, 1838. Her mother’s name was Analea, and her father’s name was Caesar. Both of them had royal origins. She studied at the Chiefs’ Children’s School. It was a boarding school led by an American missionary couple. After her graduation, she took some classes from Oahu College.

Liliuokalani was courted by several men who came from affluent families. In 1862, she married the American John Owen Dominis. She never had her children. She adopted a girl named Lydia and a boy named Joseph. The third child that she adopted was the illegitimate son that her husband had with a maid.

In 1877, Liliuokalani became the heir apparent to the Hawaiian throne. The current king was her brother, Kalakaua. She frequently travelled, meeting prominent leaders such as Queen Victoria and U. S. President Grover Cleveland. She served as the regent for brief periods in 1881 and 1891 when her brother was away from the country.

King Kalakaua passed away in San Francisco on January 20, 1891. Liliuokalani officially became the queen of Hawaii on January 29. She went on a tour of the islands to greet the people. She quickly changed the cabinet of ministers. At the same time, the four political parties were fighting during the legislative assembly.

Liliuokalani tried to change the constitution of Hawaii. She wanted to give the power back to the monarchy and the Native people. This led to significant protests and meetings. The opponents ultimately staged a coup with the help of American politicians and soldiers. The monarchy was overthrown on January 17, 1893.

In January 1895, a counter-revolution was started with the intention of restoring the monarchy. It quickly failed. Liliuokalani was put into house arrest. She was set free in October 1896. Over the next few years, she filed several lawsuits against the United States. She wanted to take back the Hawaiian Crown Lands that once belonged to the monarchy. She did not succeed in her mission.

Liliuokalani played several instruments, such as the guitar and ukulele. She performed different types of music. She also wrote her compositions. Her most famous melody is “Aloha Oe.” In 1898, she published a memoir called Hawaii’s Story by Hawaii’s Queen.

Liliuokalani spent the rest of her life in her palace in Hawaii. She occasionally also stayed in the United States. She passed away on November 11, 1917. She had a state funeral at the Iolani Palace. She was buried at the Royal Mausoleum of Mauna Ala.