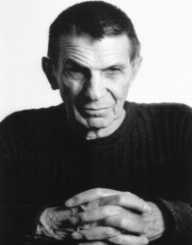 Leonard Simon Nimoy was born on March 26, 1931, in Boston, Massachusetts. His mother was a homemaker, and his father owned a barbershop. As a child, Nimoy worked several jobs to aid his family’s budget. He began acting in a local theater when he was just eight years old. Nimoy’s parent’s wanted him to get an education and pursue a well-payed career. However, his grandfather encouraged him to do what he is most passionate about.

Besides his passion for acting, at the age of 13, Nimoy discovered his singing talent. At the age of 17, Nimoy landed his first tole in the play Awake and Sing! as Ralphie. He began taking drama lessons at Boston College and later moved to Los Angeles and enrolled at the Pasadena Playhouse. However, he stayed at the school only for six months, since he felt his acting skills are far too advanced for these classes. In 1953, he enlisted in the United States Army Reserve and served until 1955. He was a sergeant at the Army Special Services, where he wrote and narrated several shows.

After being discharged from the army, Nimoy began starring in several B movie parts. He spent more than a decade playing in small roles and decided not to aim for leading roles, rather choosing supporting roles. He appeared in series such as Perry Mason, Dragnet, and Zombies of the Stratosphere. He later acquired a role in the 1954 film Them!, which was followed by another science fiction film The Brain Eaters.

Nimoy began to gain more and more recognition and in 1961 got a part in the famous NBC’s program Wagon Train. During the 1960s, he starred in films like Bonanza, The Rebel, Rawhide, The Eleventh Hour, Perry Mason and The Virginian. He also had a role in the popular show Get Smart in 1966. In 1964, Nimoy worked together with William Shatner on an episode of NBC’s The Man from U.N.C.L.E. Shatner later became his co-star on Star Trek.

In 1966, Nimoy made his big breakthrough when he began starring as Spock, half-human, half-Vulcan character on Star Trek. The character became a major pop culture icon and is considered as one of the most popular alien roles on television. The show was broadcasted until 1969, and Nimoy received three Emmy Awards for his work on the show.
After the series ended, Nimoy went on to star as Spock in Star Trek: The Animated Series, Star Trek: The Next Generation and the Star Trek movies in 2009 and 2013. In 1969, Nimoy began working on the spy series Mission: Impossible. He went on to star in several films during the 1970s, such as the western Catlow, television film Assault on the Wayne, Baffled and The Alpha Caper.

During the 1970s, Nimoy also gained recognition for his stage work. One of the first roles on stage after Star Trek series was Fiddler on the Roof. Later in 1971, he starred as Arthur Goldman in The Man in the Glass Booth in San Diego. In 1974, he got a role in One Flew Over the Cuckoo’s Nest. He also played the title role in the Royal Shakespeare Company’s Sherlock Holmes.

In 1977, Nimoy began portraying Martin Dysart in the play Equus on Broadway. In 1981, he starred in the one-man-show Vincent, and later wrote a book on it.

Nimoy worked as a voice actor in the 1994 documentary film Destiny in Space and also voiced the 1999 Sega Dreamcast game Seaman. He and his Star Trek co-star John de Lancie created the audio-production firm Alien Voices, which specialized in audio dramatizations. In 2005, he voiced the computer game Civilization IV.

During his career, Nimoy has made several special appearances. He was the host of Nickelodeon show Standby…Lights! Camera! Action! from 1982 until 1987. In 2000, he began working on the AEN TV Network series Our 20th Century, covering topics on world news, sports, entertainment, and technology. In 2007, Nimoy produced the play Shakespeare’s Will. In 2010, he announced his retirement from playing Spock. However, he continued to make several other on-screen appearances.

Nimoy first married in 1954 to actress Sandra Zober. The couple had two children- Julie and Adam. He and Sandra divorced in 1987, after 32 years of marriage. Two years later, he married actress Susan Bay. One of his biggest hobbies is flying-Nimoy owned an airplane and was a private pilot. In his honor, the asteroid 4864 Nimoy was named after him.

In 2014, Nimoy revealed that he had been diagnosed with the chronic obstructive pulmonary disease, which was attributed to his heavy smoking which he gave up 30 years ago. In 2015, after experiencing chest pains, he was hospitalized. On February 25, 2015, he fell into a coma and died two years later, at the age of 83.