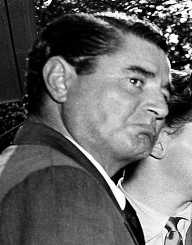 Thomas Leo McCarey, a three-time Academy award-winning American Director, Producer and Screenplay writer was born on 3rd October 1898 in Los Angeles, California, USA. He is best-known for some of his comedy films including ‘Duck Soup’ and ‘The Awful Truth.’

In the 1930s, McCarey earned a reputation for his screwball comedies and was often referred to as the most popular comedy director of Hollywood in the Pre-World War II era. After the War, he shifted his focus in making more socially relevant, spiritually oriented Films. He was successful in both the genres. He was involved in making more than 200 films throughout his film career.

Leo McCarey attended St. Joseph’s Catholic School and Los Angeles High School as part of his Primary and Secondary education. On his father’s insistence, he enrolled into and graduated from the Southern California Law School. After completing graduation, he began his professional career as a Criminal Defense Attorney.

Leo was a charming man with striking features. His childhood friend, actor and director David Butler introduced him to Tod Browning. Leo became an Assistant Director to Browning in 1919 after trying his luck in boxing, mining, and song-writing. Though Leo could have easily become an actor with those photogenic looks, Butler convinced him otherwise, and Leo ventured into the creative side of film-making.

Leo McCarey joined Hal Roach Studios in 1923 as a gagman. He wrote gags for the ‘Our Gang’ series and also for other studio projects. He combined with Charley Chase and their alliance became quite fruitful when both of them together produced and directed some shorts.

The milestone of his career came shortly afterward when he decided to associate himself with two of the most iconic comedy characters of the world, Stan Laurel and Oliver Hardy. The threesomes’ eventful journey was a grand success, and they ended up making 19 super comic films together. These 19 epic comedies were integral in developing Leo’s comic sensibilities.

Leo McCarey directed his first full-length feature film ‘The Sophomore’ in 1929 and ‘Red Hot Rhythm,’ also in the same year. His 1930 comedy ‘Part-Time Wife,’ enacted by Edmund Lowe and Leila Hyams as the estranged couple who reconnect through golf, was critically acclaimed.

Though regarded as one of the greatest comedies of all time, his 1933 film ‘Duck Soup’ starring Marx Brothers was initially a flop but went on to develop a passionate fan following with the passage of time. In 1937 came McCarey’s most personal film ‘Make Way for Tomorrow.’ The film’s story revolves around the lives of an impoverished elderly couple who are forced to stay apart due to economic and familial reasons. Though the film did not see much box-office success, it is till date regarded as a masterpiece.

McCarey’s another iconic screwball comedy film ‘The Awful Truth’ was released in 1937 after making a series of comedy films where he successfully blends reality and farce with his signature comic sense.

In the 1940s, Leo McCarey gradually started making more serious socially relevant films. He even made some overtly religious films. He made two consecutive films featuring Bing Crosby in the lead role. ‘Going My Way,’ a story about a priest and his unorthodox methods, was released in 1944. He came up with another one in 1945, ‘The Bells of St. Mary’s’. Both these films found grand success and were superhits in terms of Box Office collection.

After the World War II, Leo McCarey popularity nosedived, and his 1952 film ‘My Son John’ failed to elicit the desired response and flopped miserably. He tried to bounce back with the film ‘An Affair to Remember’ in 1957, and the film did moderately well. He made his last film ‘Satan never sleeps’ in 1962, but success eluded him this time also.

Leo McCarey's 1937 comedy ‘The Awful Truth’ was selected for preservation in the United States National Film Registry in 1996. The film is considered a unique document for its cultural, historical and aesthetic significance.

His 1944 musical comedy ‘Going My Way’ was the highest earning movie of 1944. It was nominated for ten Academy Awards. The film eventually won seven Academy Awards including the ‘Best Picture.’

Leo McCarey married Stella Martin in 1920. They had a daughter, Virginia. Their conjugal life extended for the next five decades until Leo’s death in 1969.

On July 5, 1969, Leo McCarey died at the age of 70 from Emphysema at Santa Monica, California, United States. He was interred in the Holy Cross Cemetery in Culver City, California.