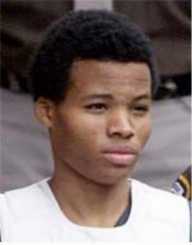 Lee Boyd Malvo is a convicted criminal serving a lifetime jail term in the US, after a killing spree in 2002

Lee Boyd Malvo was born to Leslie Malvo and Una James on February 18, 1985, in Kingston, Jamaica. His parents did not marry. Malvo was raised by his single mother. Malvo lived with many relatives in his formative years. He moved from one relative to the other, while his mother worked for a living.

A bright student, he joined York Castle High School. Malvo moved with his mother to Antigua at the age of 14. His mother envisaged a better life for his son in the Caribbean Island. Malvo continued his education at a local Seventh Day Adventist school in Antigua. He posted good grades in class and became a rewarded athlete in his school.

During his stay in Antigua, his mother introduced him to John Allen Muhammad. Lee Boyd Malvo got a father figure in his life. His mother moved with Muhammad to the US under falsified travel documents. In 2001 Malvo followed his mother to the US with faked documents. He settled in Florida with his mother for a while. His mother then left him in the care of Muhammad. After converting to Islam and joining the Nation of Islam, Malvo and Muhammad moved to the state of Washington on the US west coast.

The two lived in a shelter for the homeless in Bellingham, Washington. Lee Boyd Malvo enrolled for studies at the Bellingham High School. He registered Muhammad as his father in the official school documents. Malvo presented himself as Muhammad’s son in the neighborhood. He learned shooting skills from Muhammad. Muhammad once served in the US military.

For unknown reasons, Lee Boyd Malvo and Muhammad started a killing spree in 2002. They claimed their first three victims in September 2002 in the states of Maryland and Louisiana. They moved to Washington the following month. In October 2002 they continued their killings in Washington D.C. metropolitan area.

As trained marksmen, they hid in the trunk of their vehicle as their sniper nest. Working in cohorts, they fatally claimed ten victims and seriously injured three others. As the attacks ensued, the residents of the neighboring states went into a panic. The police pieced up clues to a dead end. The two left no credible pattern of their attacks. They also killed indiscriminately adults or the young.

Encouraged by their activities, Lee Boyd Malvo and Muhammad contacted the police with a ransom bargain. They demanded USD 10 million for the ending of the killings. Finally, the police had a real clue of the sniper killers. On October 24, 2002, the police found their hideout and apprehended the two while in their sleep.

The police found Malvo’s fingerprints on the murder weapon and other documents at the crime scene. In his confession, Lee Boyd Malvo implicated Muhammad as the perpetrator of the first six murders. He also claimed Muhammad convinced him that the ransom was to build a utopia for the needy in Canada.

Lee Boyd Malvo was charged in Washington D.C. but later transferred to Virginia. In Virginia, he was accused on two murder offenses, including killing a Federal officer Linda Franklin. He had another offense of unlawful possession and use of a firearm. He pleaded not guilty on all the accounts against him. Malvo argued that he was brainwashed by Muhammad to believe in everything Muhammad said.

The jury found him guilty of all the charges against him on December 18, 2003. On March 10, 2004, Malvo was sentenced to a life sentence without any provisions of parole. In another case, Malvo pleaded guilty to the charges of illegal use of a firearm, one murder and an attempt on the life of Caroline Seawell. Malvo was convicted to life in prison for the murder and eight years for the unlawful possession of a firearm.

Lee Boyd Malvo was underage when he committed the crimes in two the two states. While Virginia sentenced juveniles to death, Maryland had an exemption from the death penalty if the crimes were committed by a minor. Malvo was transferred to Maryland for other court charges in May 2005. He pleaded guilty of other killings and was sentenced to serve six consecutive lifetimes.

Currently serving at the Red Onion State Prison, Lee Boyd Malvo has exhibited positive change. In 2007, he apologized to a family member of his victim. He also apologized to another surviving victim in 2010.

As Lee Boyd Malvo serves his time in jail, two films on his life have been produced in 2003 and 2013. Muhammad was sentenced to death by lethal injection.