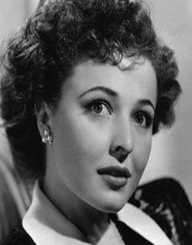 Laraine Day was a Hollywood actress and also a radio and television commentator. Day worked in many studio films including with big ones like Metro-Goldwyn-Mayer (MGM) and RKO Pictures, both of which signed her up at different stages of her career. She worked with many leading stars like Hedy Lamarr, Lana Turner, Shirley Temple, etc. and was paired opposite some giants of the Golden Age of Hollywood like John Wayne, Robert Mitchum, and Cary Grant.

Laraine Day was born as La Raine Johnson on October 13, 1920, into a wealthy Mormon family. Her great-grandfather was a Mormon pioneer of the Latter Day Saint Movement. She had seven siblings. Her twin brother Lamar served the United States Army during World War II.  She started her acting career after her family moved from Utah to California. She graduated from Polytechnic High School in 1938.

Day’s debut came in 1937 in King Vidor’s drama Stella Dallas which starred Barbara Stanwyck. But her role was so small that it was uncredited. Nevertheless, she soon bagged leading roles alongside actor Georges O’Brien in a number of westerns under RKO Pictures. Master director Josef Von Sternberg noticed her and cast her in a prominent role in his dark crime drama Sergeant Madden.

In 1939 itself, Day was signed up by MGM and gained widespread popularity as Nurse Mary Lamont in seven back to back Dr. Kildare movies. She also established a playhouse for Mormon actors in Los Angeles. Author and screenwriter Ray Bradbury offered his services there.

Laraine Day worked with many legendary filmmakers including Alfred Hitchcock in the Oscar-nominated spy thriller Foreign Correspondent. Day was not content with her roles under MGM especially when she was getting more meaty characters under other studio productions, like for example RKO’s crime noir The Locket where she starred opposite Robert Mitchum.

She eventually did sign a lucrative contract with RKO in 1946 which resulted in films opposite John Wayne and Kirk Douglas. Known for her soft, resonant voice, Day epitomised the ‘Girl Next Door’ image. But her film roles dried up in the 1950s as she focused more on television, even hosting her show - The Laraine Day Show, in 1951. From there on, Day devoted her time mostly to TV series.

Laraine Day was active on stage also. In 1941, she debuted opposite Gregory Peck in Gas Light.

She also starred in the revivals of The Women and The Time of the Cuckoo.

Laraine Day was a strict Mormon who never cursed, smoked, or indulged in alcohol, even avoiding coffee or tea. She was a Republican throughout her life. Day dated actor Glenn Ford in early 1940s. Her first marriage resulted in adopting three children but soon ended in divorce. Her high-profile second marriage to Leo Durocher, one of the greatest player-managers in baseball, was much publicized.

She immersed herself in the game so much that she penned a book titled Day With the Giants, which gave an insightful account of the New York Giants baseball team. She was referred to as "the First Lady of Baseball" during this period. Day became the first woman to be honoured by the Baseball Writers Association in 1951. She received a star on the Hollywood Walk of Fame at 6676 Hollywood Boulevard on February 8, 1960.

Laraine Day passed away on November 10, 2007, from natural causes. She died at her daughter’s home in Utah. A memorial service took place in the Hollywood Hills five days later.