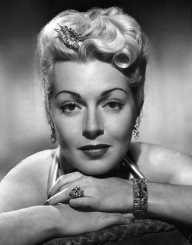 Lana Turner was born on February 8, 1921, in Wallace, Indiana, USA. Her parents were Mildred (Cowan) and John Turner. She later went by the stage name Lana, which is what she is best known as now. At a young age, her father was murdered, so she spent most of her childhood only living with her mother.

Lana Turner got her start in acting when she was recruited by William Wilkerson in 1937. Her beauty caught his eye, and the eyes of fans all around the country. She acted in her first film, They Won’t Forget, in 1937. For several years after he starts acting, she played beautiful women in most romantic movies.

It was around the 1950’s when she started to take on more serious roles. In 1956, she starred in a historical drama, Diane. Lana Turner continued to act in drama films throughout the 1950’s and 1960’s. She starred in her last movie in Madame X in 1966. However, she did appear in several bit parts in movies later on in her career, including Bittersweet Love and Witches’ Brew.

After she retired from film, she began acting on television, mostly appearing in cameos and other small roles. Some of the television shows she appeared on were The Love Boat, the Survivors, and Falcon Crest. She retired from acting in 1984.

Some of her most famous films are listed below.

Marriage Is a Private Affair

During her time as an actress, Lana Turner won three awards and was nominated for several others. She was even nominated for five Laurel Awards and one Oscar, although she never won either of these awards. Some of her most prestigious awards are listed below.

Lana Turner earned her star on the Walk of Fame in 1960.

In 1982, Lana Turner published her first and only book. It was an autobiographical work titled Lana: the Lady, the Legend, the Truth. The book was released several times in new editions. There are currently five editions of the book.

Lana Turner was both married and divorced eight times, to seven different men. She was first married to Joseph Crane in 1942, but the couple divorced the next year. She later married him again in 1943 but divorced again in 1944. He was next married to Henry Topping in 1948, but this marriage too ended in divorced in 1952.

Throughout much of her life, Lana Turner was a heavy smoker. In the 1990’s, Turner was diagnosed with throat cancer, complications of which would later become her cause of death. Lana Turner died on June 29, 1995, in Los Angeles, California, USA. She was 74 years old when she passed away.