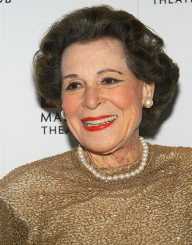 Kitty Carlisle was a legendary American actress, singer and a vocal advocate of the preservation of arts across the US.

Kitty Carlisle was born in New Orleans as Catherine Conn on September 3, 1910. She came from a well off family with a gynecologist father and an aristocratic mother. Her maternal grandfather served as the mayor of Shreveport in Louisiana. She grew up under the care of her mother after her father died when she was 10 years.

Following her father’s death, her mother sent her to private schools in Switzerland. Carlisle studied in Lausanne at the Chateau Mont-Choisi. She then moved to Sorbonne for her high school. After graduating from high school, she moved to England. Carlisle studied business at the London School of Economics before going into arts. She enrolled at the Royal Academy of Dramatic Arts in London to study drama and arts. Carlisle traveled to Europe with her mother, who hoped of her daughter getting married to rich nobility in Switzerland. When she realized her daughter’s passion for drama, she decided to support her in her endeavors.

In 1932, Carlisle returned to New York with her mother. She joined the Broadway Theater as an actress. She appeared in several operas and musical plays in her maiden days. She cast in the first show of the opera titled The Rape of Lucretia. Carlisle performed the song Carmen composed by George Bizet in his tour of Salt Lake City. In 1933 she appeared in the opera Champagne Sec. She cast in two memorable comedies White Horse Inn and Three Waltzes, produced in 1936 and 1937 respectively.

She entered the Hollywood industry in the early 1920s. In 1934 she cast in the film Murder at the Vanities. Carlisle featured in other films in 1934 notably, Here Is My Heart and She Loves Me Not. She cast in the film A Night at the Opera, with the Marx Brothers in 1935. Since her strength was not in film acting, Carlisle took a sabbatical from Hollywood to go back to the theater. She resumed film acting in 1987 in the film Radio Days. She had a role in the cast of Six Degrees of Separation, film production of 1993. She featured in her last film in 2002 when she appeared in Catch Me If You Can.

She went back to the theater and appeared in numerous dramatic plays in the 1940s. She appeared in the 1940 production Walk with Music, followed by the 1943 double cast of The Merry Widow and Design for Living. The following year, she cast in the production There’s Always Juliet. Carlisle continued with drama and went to appear in her husband’s dramatic plays like the Man Who Came to Dinner, and Anniversary Waltz. The plays were performed in 1949 and 1954 respectively.

She debuted on the television screen in the 1950s after her fame in the dramatic theater. She became a regular panelist on the quiz show, To Tell the Truth, starting 1956. She stayed on the show panel for the next two decades. Carlisle appeared on other shows like What’s My Line? And I’ve Got a Secret. She entertained the viewers and captivated the audience with her elegance and good mannerism. Carlisle appeared on every show with a sense of fashion statement with her outfit.

As a lover of arts, Carlisle lobbied for financial support in the city of New York for the preservation of historical sites. She worked with various council committees in the upholding the performing arts theaters and schools in the city.

Due to advocacy and participation in the conservation efforts, she received a number of accolades. She headed the Rockefeller Foundation Conference on Woman in 1966. She advised the office of Governor Rockefeller on the issues concerning women and performing arts. She served from 1976 to 1996 as chairperson of New York’s State Council on arts. The Kitty Carlisle Hart Theater bears her name. In 2003, she received the Landmarks Lion Award. She established her column on the Women’s Unit News called Kitty’s Calendar.

On August 10, 1946, Carlisle married Moss Hart. They got two children in their union. Carlisle outlived her husband who died at their Palm Springs home, California on December 20, 1961. She never remarried in her life.

Carlisle changed her name during a trip to Paris. She learned that her name Conn sounded like an obscene word in the French language. She chose to adopt her new name to rhyme with her dramatic quest. She added her husband’s last name Hart after her marriage.

She struggled with poor health in her twilight years. Prior to her death, she fought a battle with prolonged bouts of pneumonia. Carlisle died from heart failure on April 17, 2007, at the age of 97, in Manhattan, New York. She is buried at the Ferncliff Cemetery in New York.

In her active life, she graduated in business from the London School of Economics. She chose her passion in arts instead of going for a lucrative career in business. Her input in the art world helped New York maintain its glamour as the arts and drama capital of the US.