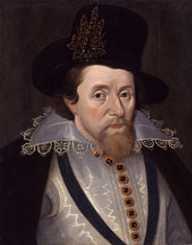 British monarch James I was born on the 19 June 1566 in Edinburgh Castle, Scotland to Mary, Queen of Scots and Lord Darnley, Henry Stuart. The only child of the couple. Lord Darnley died eight months after the birth of his son, and after Mary, Queen of Scots abdicated she went into exile in 1568. James, I became King of Scotland in July 1567. Raised by Scottish lords, he did not see his mother again.

The Earl of Morton ceased his role in the regency in 1578 and James aged 12 began to rule assisted by various factions. The Duke of Lennox was a Roman Catholic who manipulated the young king and The Earl of Gowrie then kidnapped James in 1582 and made him severe ties with Lennox. James escaped in 1583 and plans were made for him to claim the throne of England after Elizabeth I, who had no heirs. James entered into an alliance with Elizabeth I in 1586. As King I of Scotland he was able to control the Roman Catholic and Protestant nobility and ruled via the Octavians. A Presbyterian from 1584 he was head of the church in Scotland. James ascended the English throne when Elizabeth I died in March 1603 and his reign lasted 22 years.

James married Anne of Denmark, daughter of King Frederick II in 1589. Their first child Prince Henry was born in 1594. Prince Charles became heir when his Prince Henry died in 1612. James died in 1625 at Theobalds in Hertfordshire, England. He was the author of Daemonologie (1597), The Law of Free Monarchies (1598), Basilikon Doron (1599) and A Counterblaste to Tobacco (1604).