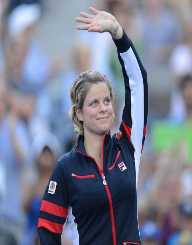 Kim Clijsters was born 8th June 1983 to Lei Clijsters and Els Vandecaetsbeek. She was born in Bilzen, Belgium, and is one of two children, with a younger sister named Elke. Kim Clijsters was born into a sporting family, with her father playing international football, and her mother a national gymnastics champion. Clijsters’ younger sister was a notable doubles tennis player. Kim Clijsters started playing tennis when she was five, and she grew up loving the sport. Not only playing, but also watching as she attended matches throughout Europe as a spectator with her parents.

In 1999, Kim Clijsters turned professional. She had a busy year, qualifying for Wimbledon where she won several matches and reaching the third round of the U.S. Open. She won her first Women’s Tennis Association (WTA) singles title, and she followed this up with her first WTA doubles title.

Kim Clijsters continued to compete over the next four years, and continually climbed the rankings. In August 2003, she finally claimed the world number one ranking in singles, and a week later, was also ranked number one in doubles. There are only five other female players that have been able to attain this achievement.

She started 2004 by injuring her ankle while competing in the Hopman Cup. Kim Clijsters withdrew from the following tournament to rest the ankle. She played in the Australian Open shortly after which is a grand slam tournament, where she reached the finals.

Kim Clijsters won her next two tournaments, but then injured her wrist. She withdrew from the tournament she was in, and the following tournament as well. It was six weeks before she competed again. She played well, but in another tournament shortly after, pulled out again. Although Kim Clijsters’ intention was to rest for a few weeks, she had to have surgery which put her out of competition for three months while she recuperated.

In her comeback tournament she got through to the semi-finals, but once again had to pull out because she aggravated her injury. Kim Clijsters missed the rest of the 2004 season. Although she missed the first grand slam event in 2005, Kim Clijsters returned to the game and performed very well in her matches. She hit a fantastic run of form and went on in 2005 to win her first grand slam title, the U.S. Open. She won many other tournaments during the year, and she finished the year back in number two position on the singles rankings.

Although 2006 saw Kim Clijsters win more tournaments, it also saw her injure her wrist again, which put her on the sidelines. 2007 had always been touted by Kim Clijsters as the year she would retire. Her first grand slam title for the year was Wimbledon, as she had earlier pulled out of the French Open and U.S. Open. She didn’t do very well in following tournaments, and in May announced she was going into immediate retirement due to injury.

Kim Clijsters gave birth to her daughter in February 2008. In early 2009, she played in an exhibition match with other tennis stars such as Steffi Graf, Andre Agassi, and Tim Henman. After calling a press conference, Kim Clijsters announced her comeback to professional tennis.

She received wildcards into three events. The first two she got through to the finals, her third event was the U.S. Open. Unbelievably, Kim Clijsters won the U.S. Open, the first wildcard to do so in U.S. Open history. The win put her back inside the top 20.

During 2010, Kim Clijsters moved back up the ranks and finished the year ranked at number three. She started 2011 with a fourth grand slam title by winning the Australian Open. As the season progressed, although Kim Clijsters once again rose to the number one ranking, she had to pull out of the season early to recover from injury. Kim Clijsters played on in 2012, but she was plagued by injury, and she slowly dropped down the rankings and didn’t perform well overall. She officially retired in September 2012.

Kim Clijsters was careful with her endorsements, but she had a relationship with FILA for her clothing from 2002 through to her retirement in 2012, and her racquets were from Babolat Pure Drive from 1999 onwards. Other endorsement sponsors included the Thomas Cook Group, ADECCO, and Citizen Watches.

Kim Clijsters has continued to play in exhibition matches on the world stage over the last few years. She has played at various venues around the world, including the Ladies’ Invitation Doubles match at the Wimbledon Championships in 2017.

Kim Clijsters had several coaches throughout her career:

In 2006, Kim Clijsters announced her engagement to Brian Lynch, an American basketball player. They married in July 2007, and they had a daughter, Jade, in 2008. Their second child, a son named Jack, was born in 2013, and their third child, another son, named Blake, was born in 2016.