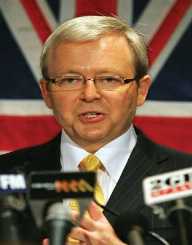 Former Australian Prime Minister and politician Kevin Rudd was born in Nambour, Queensland, Australia on the 21 September 1957. His parents were Albert Rudd and Margaret DeVere, and he had three older siblings. The family lived on a dairy farm close to Eumundi. When he was a pre-teen, Rudd’s father died; the family subsequently experienced financial difficulty and had to leave their farm. This experience led to Rudd becoming politically active at a young age. Although his family had formerly been members of the County Party, Rudd chose to become a member of the Australian Labour Party at the age of 15.

Kevin Rudd spent time as a boarder at Marist College Ashgrove in Brisbane and later changed schools to Nambour State High School where he excelled academically. After graduating from high school, Rudd enrolled at the Australian National University in Canberra where he did Asian Studies. He was awarded a first class honors degree majoring in Chinese languages and history. Rudd then spent time in Taiwan studying at the Mandarin Training Center of the National Taiwan Normal University in Taipei (1980).

In 1981 Kevin Rudd became a staff member of the Australian Department of Foreign Affairs. He served as a diplomat abroad until 1988 when he returned to Australia to take up a position as Queensland Opposition Leader Wayne Goss’s Chief of Staff. When Goss was elected state Premier in 1989, he appointed Rudd Director-General of the Office of Cabinet. In this position, Rudd was involved in investigating the teaching of Asian languages and culture in Australia. This research became known as The Rudd Report.

Rudd left politics in 1995 and took up a position as a senior China consultant with KPMG Australia. Then in 1996, he won selection for the Labor Party for the seat of Griffith in the federal election. He was defeated but stood again in 1998 and won.

Rudd’s maiden speech was made in the Australian House of Representatives on the 11 November 1998. He was a shadow minister from 2001 until 2006. Rudd was a famous spokesman for the Labor Party, and this had been shown in opinion polls resulting in Kim Beazley calling a leadership election on the 1 December 2006. Rudd confirmed his candidacy for leadership and on the 4 December 2006. He was elected Leader of the Labor Party with Julia Gillard as his deputy. In 2007 the Labor Party won a landslide victory, and Rudd became the 26th Prime Minister of Australia. He held this position until 2010.

During his first term as Prime Minister Kevin Rudd saw Australia have its first female deputy Prime Minister, Julia Gillard. He also oversaw the signing of the Kyoto Protocol, the international agreement on greenhouse gas emissions. On the 13 February 2008, Australia’s 42nd parliament was the first to be preceded by a welcome to a county from Aboriginal people in the area. On the 14 February Rudd led a parliamentary apology regarding past policies which had an adverse effect on Australian aboriginal people. This occasion became known as National Sorry Day. In September 2008, Rudd oversaw the swearing in of Ms. Quentin Bryce as Australia’s first female Governor-General. Other initiatives included the Fair Work Program in 2010.

In 2010, after some negative opinion-polls, Julia Gillard challenged Rudd as the leader, and he was disposed of in a leadership spill. Gillard subsequently appointed Rudd Foreign Minister, and he held this post until February 22, 2012. Political tensions within the Australian Labor Party led to two leadership challenges before Gillard was disposed of as leader on the 26 June 2013 and Kevin Rudd emerged as the winner. He was sworn in as prime minister for the second time on the 26 June 2013.

From 2010 until 2013 Rudd served as Foreign Minister of Australia. He re-contested the leadership of the Australian Labor Party. His party was defeated in the 2013 election. On the 13 November 2013, Rudd announced that he was stepping down from Parliament.

Kevin Rudd was appointed a Senior Fellow at the John F. Kennedy School of Government at Harvard University in February 2014. He undertook a major research project into the future of China-United States relations. In September of that year, he was appointed a Distinguished Fellow at the Paulson Institute at Chicago University. Rudd was also selected the inaugural President of the Asia Society Policy Institute and chair of the Independent Commission of Multilateralism and Sanitation and Water for All global partnership.

Rudd was keen to win Australia’s nomination for Secretary-General of the United Nations, but on the 28 July 2016, Prime Minister Malcolm Turnbull refused to endorse his candidacy.

The Australian newspaper reported in 2017 that Rudd is planning a two-volume memoir. The first volume, titled No for the Faint-Hearted: A Personal Reflection on Life, Politics and Purpose 1957-2007 will be released in 2018.

Kevin Rudd was the first Australian prime minister to embrace social media. During the 2007 election campaign, he used it to interact with voters as part of his highly successful Kevin 07 election strategy.

Kevin Rudd was the third Labor leader to win government from opposition since World War II. A significant achievement of his administration was their response to the 2008 Global Financial Crisis when Australia was the only major economy that did not go into recession. The OECD/IMF assessed the Australian government’s action as one of the most effective.

Kevin Rudd married Therese Rein in 1981, and the couple has three grownup children.