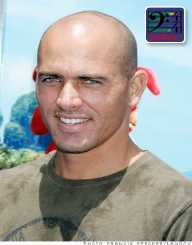 Kelly Slater was born on February 11, 1972. He is an American surfer who has won eleven times at the ASP World Tour. He is a professional surfer and surfs as a way of living. He has won other competitions including Boost Mobile Pro’ and ‘Rip Curl Pro among others. He is also interested in music and film. He is athletic and he loves what he does. He has appeared in several movies and documentaries including ‘Down the Barrel’, ‘Fighting Fear’, ‘Endless Summer II’ and Surf’s Up’. He also appeared in the television show ‘Baywatch’. He is also a good writer as he has written his autobiography titled ‘Pipe Dreams: A Surfer’s Journey’. Kelly is also a humanitarian and environmentalist.

Robert Kelly Slater was born on February 11, 1972, in Cocoa Beach, Florida, United States of America. He was born to Stephen and Judy Slater. He was brought up alongside two siblings, Sean and Stephen. He loved surfing from a very young age. He loved spending most of his time on the beach since his father owned a store that housed fishing equipments just beside the ocean. He became a talented surfer by the time he was a teenager.

Kelly Slater loved surfing that by the 1990s he had started appearing on surfing magazines because of his surfing skills. His appearance on surfing magazines led to him being approached by a major producer of surfwear ‘Quicksilver’. Currently he has signed a contract with the company ‘Kering’. In 1990, he participated in the tournament ‘Body Glove Surfbout’ which was held in California. He emerged victorious and he earned a role in the television show ‘Baywatch’. He also appeared in the movie ‘Surfers- The movie’ which was directed by Bill Delaney. In the movie, he acted alongside Mike Cruickshank.

In 1992, Kelly Slater took part in the ‘Association of Surfing Professional (ASP) World Tour.’ In the competition he became number one and went on to take the first place at the ‘Rip Curl Pro Landes’ which was held in France. He also took first place in the ‘Marui Pipe Masters’ which was held in Hawaii. In 1994, he won many championships such as the ‘Rip Curl Pro’, ‘ASP World Tour’ and ‘Bud Surf Tour Seaside Reef’ among so many other championships. The following year he made his second win at the ‘ASP World Tour’.

Kelly Slater also won other championships such as the ‘Quicksilver Pro’ held in Indonesia, ‘Triple Crown of Surfing’ and ‘Chiemsee Pipe Masters’ which were both held in Hawaii. In 1996, he won a third time at the ‘ASP World Tour’. In the same year he took part in championships such as ‘Rip Curl Pro Hossegor’, ‘Quicksilver Surf Masters’, ‘CSI Presents Billabong Pro’ and ‘Coke Surf Classic’. In 1997, he won the ‘ASP World Tour’ for the fifth time in a row and broke Mark Richard’s Record. He also won championships such as ‘Tokushima Pro’ held in Japan, ‘Kaiser Summer Surf’ held in Brazil and ‘Grand Slam’ which was held in Australia.

In 1998, Kelly Slater won the ‘ASP World Tour’ for the sixth time, and he went on to win the ‘Triple Crown of Surfing’ and ‘Billabong Pro.’ In 1999, he took first place at the ‘Mountain Dew Pipeline Masters’ which was held in Hawaii. He continued to win tournaments such as ‘Gotcha Pro Tahiti’ among so many other tournaments in his career. In 2003, he published his autobiography titled ‘Pipe Dreams: A Surfer’s Journey’. From the year 2004 to the year 2006, he won many tournaments including ‘Snickers Australian Open’, ‘Boost Mobile Pro’, ‘Quicksilver Pro’ and he finished first place in on two occasions at the ‘ASP World Tour’.

In 2007, Kelly Slater broke Tim Curran’s record when he won the ‘Boost Mobile Pro.’ In 2008, he published the book ‘Kelly Slater: For the Love’ in collaboration with Australian surfer and writer Phil Jaratt. The same year he also participated and won titles in the ‘Boost Mobile Pro’, ‘Rip Curl Pro’ and ‘Quicksilver Pro’ among many others. He went ahead to win again at the ‘ASP World Tour’ during 2010 to 2014. He also won in other tournaments in that period such as ‘The Rip Curl Pro’ and the ‘Volcom Fiji Pro’.

Kelly Slater is currently in a relationship with model and designer Kalani Miller. He has a daughter called Taylor from his relationship with Tamara a former girlfriend. In 2002, a video game was launched in his honour titled ‘Kelly Slater’s Pro Surfer’. He is a member on the Board of Advisors of the Sea Shepherd Conservation Society in San Juan Island, United States of America. He also runs an organization called ‘Surfers Against Suicide’.  He has a net worth of $20 million.