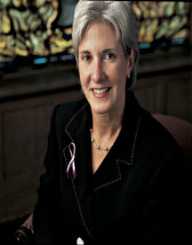 Kathleen Sebelius was born on May 15, 1948. She is an American politician. She is also a businesswoman. She is currently Seventy years of age.

Kathleen Sebelius was born Kathleen Gilligan on May 15, 1948, in Cincinnati, Ohio. She was born to Mary Kathryn and Former Ohio Governor John ‘Jack’ Gilligan. She studied at Summit Country Day School, Cincinnati.

In 1977, Kathleen Sebelius became the Executive Officer and Chief Lobbyist for Kansas Trial Lawyers Association a position she held till 1986. In 1978, she became a member of the Common Cause National Governing Board. In 1986, she was elected to the Kansas House of Representatives.

In 1994, she won the State Insurance Commissioner post. In 2001, she became one among the Governing Magazine’s Public Officials of the year.  In 2002, she contested and won the Gubernatorial elections hence becoming the Governor of Kansas.

In the 2004 general election, she has endorsed the potential John Kerry’s running mate, but they turned unfortunate by losing. As a governor, she fought against abortion, introduced morning-after pills available for female, enhanced drug importation for availability to her citizens, contradicting possession of firearms by civilians, strengthen education sectors.

In 2005, she emerged one among the best serving governors in America due to the inherited debt elimination. In 2006, she once again emerged victorious as the Governor of Kansas. She was later on elected to be the chair of the Democratic Governors Association. In 2008, she endorsed Obama’s campaign. In 2009, she selected Secretary of Health and Human Services a post she held till 2014.

In 2012, Kathleen Sebelius was charged with Hatch act because she uttered political remarks while in an official government event. In 2014, Sebelius resigned as the Secretary of Health and Human Services.

She acts as a senior advisor to the Aspen Institute and Out Leadership. She is the co-chair of the Aspen Health Strategy Group. Sebelius is currently a speaker for the National and International Organizations.

In 1974, Kathleen Sebelius got married to K. Gary Sebelius who is a federal magistrate judge with whom she has two children. She is currently Seventy years old.