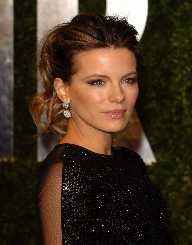 Kate Beckinsale was the daughter of Richard Beckinsale, who died when she was five years old and Judy Loe. Both parents were actors. As a young girl, she got involved in youth theatre. When Beckinsale was fifteen, she had a nervous breakdown and received therapy. She has a half-sister Samantha Beckinsale. Her mother remarried, and she has some step-siblings.

Kate Beckinsale was educated at Godolphin and Latymer School in Hammersmith, London. After high school, she attended Oxford University where she was involved in theatre while studying languages.

Kenneth Branagh cast her in the film Much Ado About Nothing (1993) when Beckinsale was still a student at Oxford University. She subsequently dropped out of university to pursue a career in acting. She was in Haunted, a television version of Emma(1996) and Cold Comfort Farm (1995).

Kate Beckinsale moved to the United States and settled in LA where she appeared in The Last Days of Disco (1998) and Brokedown Palace (1999). She was then cast in Pearl Harbour (2001) with Ben Affleck. The film was a huge success. Other films include Serendipity, The Golden Bowl, and Laurel Canyon. Beckinsale was offered the starring role of a vampire in the film Underworld (2013) which was successful at the box office. She went on to appear in Underworld: Evolution, Underworld: Rise of Lycans and Underworld Awakening.

Kate Beckinsale’s father died when she was five years old.

She was in a relationship with Michael Sheen between 1995-2003. They share a daughter, Lily Mo Sheen. Beckinsale met Len Wiseman when he directed her in Underworld, and they married in 2004. The couple separated in 2015 and divorced in 2016.

As a young woman, Kate Beckinsale suffered from anorexia.