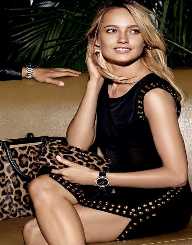 Estonian fashion model Karmen Pedaru was born on May 10, 1990, in Kehra. She lost her mother at an early age- only when she was five years old. Her grandmother afterward raised Pedaru. Her father was an Estonian athlete, and her grandfather was a professional basketball player. When she was six years old, she decided to pursue her families sports career footsteps. She begun training in several sports, including basketball, football, and handball. Pedaru eventually became the goalkeeper for Estonia’s national U-19 football team.

When Pedaru was 15 years old, her life turned in a different direction. She was discovered as a model while attending a theater play with her grandmother in Tallinn. She had played for the U-19 National team for one year, and quit the team to pursue modeling.

After Karmen Pedaru was discovered in Tallin, she was soon signed to the Next Models agency. Not long after, Pedaru appeared in the Teen Vogue. The following year young model made her runway debut, representing Christopher Kane for the Spring 2007 collection. At the time, she was 17 years old. Following her first runway show, she was booked to fashion shows in Milan.

In 2008, Pedaru got her biggest opportunity, when she was booked for the 2008 New York Fashion Week. During this event, she appeared on 43 runways, appearing in shows for Marc Jacobs, Donna Karan, Givenchy and many others. This event marked the beginning of her stellar career and gave the opportunity to work for several major fashion houses. Pedaru has worked with brands like Michael Kors, D&G, Salvatore Ferragamo, Chloe, Gucci, Ralph Lauren and many others.

Pedaru was the face of several major advertisement campaigns for Derek Lam, Emporio Armani, Gucci and Ralph Lauren. In 2011, she started to represent Michal Kors brand and continues to work with the brand to date. She has also modeled two outfits for Victoria’s Secret Fashion Show. In 2011, she also appeared in several couture shows in Paris.
Pedaru joined the modeling agency IMG in 2013, and since then was featured on two covers of Vogue.

In 2014, Pedaru was featured in the critically acclaimed W Magazine cover with 11 other supermodels, including Kate Moss, Daria Werbowy, and others. In 2015, Pedaru became the leader of the Free the People ad campaign. The same year, she was also listed in the Top 10 Industry Icons and Money Girls list on Models.com. The site works as an online platform for models to present their work.

On 14 December 2012, Karmen Pedaru married Riccardo Ruini, the creative director of REM agency. The couple is still together and currently, have no children. She keeps her personal and business life separate and avoids media attention outside her work. Pedaru has several tattoos, featuring tributes to her mother, song lyrics, Albert Einstein formula and her husband’s name. Pedaru is 1.78 m tall and wears size 10.