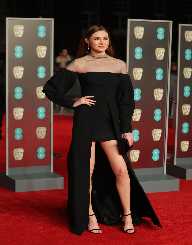 Scottish actress, model, screenwriter, and producer Karen  Gillan, the only child of her father Raymond John Gillan and mother Marie Gillan, was born on November 28, 1987, in Inverness, Scottish Highlands, Scotland, United Kingdom. Her father was a singer as well as a recording artist. Karen  Gillan became conversant in playing piano by the age of seven and was very keen to perform. While studying at the Charleston Academy, she participated in an extensive range of school productions as also various youth theatre groups and developed a passion for acting early on in her life. Bitten by the acting bug, she moved to Edinburgh at the age of sixteen and got enrolled at the Telford College to study an acting and performance course.

Karen  Gillan studied under the acclaimed theatre director Scott Johnston at the Performing Arts Studio, Scotland. To give her ambition of pursuing an acting career a further forward push, Karen  Gillan moved to London at the age of 18 and enrolled herself at the reputable Italia Conti Academy of Theatre Arts, a renowned drama school. Her distinctive red hair, gorgeous look and a towering height of 5’ 10” (178 cm) made her an ideal candidate for modeling and as such, Karen  Gillan found herself very much in demand by the modeling agencies.

Gillan was very clear in her mind about her future course of action. Though Karen  Gillan loved modeling, her first priority was acting and Gillan was not prepared to compromise her acting prowess in exchange of modeling or any other assignments. Gillan expressed her view to the modeling agencies in no uncertain terms and concentrated solely on her acting career.

In 2000, Karen Gillan was studying in her first year at the Italia Conti Academy. She got her first break as a guest artist in a detective TV series ‘Rebus’ during this period. After her debut guest appearance on TV, she performed several such short roles on various television drama series. Gillan appeared in a regular role on Channel 4's television film ‘Stacked’ in 2008 before joining the ensemble cast of the sketch comedy ‘The Kevin Bishop Show’ where Karen  Gillan played different characters including prominent personalities like Angelina Jolie and Katy Perry. Karen  Gillan successfully bagged the leading role in a series of short horror films titled ‘The Well’. The series was first aired on BBC Two as a series of short episodic films. It was later shown as a web series on BBC.co.uk.

In May 2009, Karen  Gillan received her first big break when she was cast for the role of Amy Pond, first companion of the doctor named Eleventh Doctor, the main protagonist of the long-running popular British Science Fiction television series ‘Doctor Who’. The program lasted for four years and was chiefly responsible for making Karen a household name among the Britishers. The role of the time-traveling doctor was played by actor Matt Smith. Both Karen  Gillan and Smith soon became the hottest couple of the British television industry for their wonderful on-screen chemistry though both denied any off-screen romantic link-up between the two. The four-year stint of the sci-fi series catapulted both Karen Gillan and Smith to superstardom being mobbed by their fans wherever they were seen in public.

Karen Gillan made her film debut in 2010 with a leading role in a supernatural thriller film ‘Outcast’. In 2012, Karen  Gillan appeared in a television film titled ‘We'll Take Manhattan’, where she portrayed the character of 1960s British supermodel Jean Shrimpton. With her soaring popularity after the huge success of ‘Doctor Who’, Karen Gillan bagged the lead role in the 2013 romantic comedy film ‘Not Another Happy Ending’ and followed it up with another lead role in the supernatural horror film ‘Oculus’. The film was a commercial success and made a profit of $39 million. It also attracted positive acclamation from the critics. Continuing her success story, Gillan played a pivotal role in the superhero film ‘Guardians of the Galaxy’ in 2014. The film received an overwhelming support from the box office and earned several awards and nominations.

Karen Gillan again took up a television assignment in 2014, this time in the United States. Karen Gillan was cast in the lead role of the American single-camera situational comedy ‘Selfie’, aired by ABC and produced by Warner Bros. Television. The series was canceled by ABC after airing only seven episodes. Diversifying her role beyond acting, Karen  Gillan directed and wrote the screenplay of a short film ‘Coward’ in 2015, where Gillan was also the executive producer. In the same year, Gillan was part of another two feature films called ‘The List’ and ‘The Big Short’, appearing in the capacity of the lead actress. Her supporting role in the mockumentary TV film ‘7 Days in Hell’ is another feature in her 2015 calendar.

A sequel of the 2014 film ‘Guardians of the Galaxy’ was made in 2017 and was named ‘Guardians of the Galaxy Vol. 2’, where Karen reprised the role of her hugely popular character of Nebula depicted in the original film. The sequel received the same adulation as the original one earning major awards and nominations among rave reviews from the critics. The film was also a huge commercial success.

Karen Gillan’s other important recent films include ‘In a Valley of Violence’ (2016), ‘The Circle’ (2017),  ‘Jumanji: Welcome to the Jungle’ (2017), ‘The Party's Just Beginning’ (2018), ‘Alex & the List’ (2018), and ‘Avengers: Infinity War’ (2018). Two of her films are in the post-production stage, 'All Creatures Here Below' and an Untitled Avengers film to be released in late 2018 and early 2019 respectively. Karen Gillan has earned the tag of an ‘action hero’ in the showbiz world due to the kind of adventurous roles she plays. However, Karen Gillan likes to call herself the ‘reluctant action hero’ as she feels that playing such adventurous characters was not at all planned and all such roles fell in her kitty naturally.

After having dated Andrew Brooke and Patrick Green, Karen Gillan at present is stated to be single. In 2011, Gillan promoted the cause of the global charity initiative called ‘Fashion Targets Breast Cancer’.

She is well-known for her fondness of shopping for vintage apparels and is also known for her passion for playing the piano. She presently resides alternately between New York City and Los Angeles, California, both prominent cities of the United States.