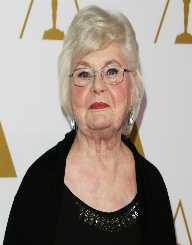 June Squibb is an American actress famous for her role in the film Nebraska, and a career spanning six decades.

June Louise Squibb was born in Vandalia, Illinois on November 6, 1929. Her parents Lewis and JoyBelle Squibb were natives of Illinois. She grew up as an only child in a middle income earning family. Her father worked for an insurance company, while her mother was a music enthusiast. JoyBelle won world championships in piano competitions.

After showing interest in entertainment, her parents supported her in pursuit of her dream. Squibb started dancing and acting at home from her tender age. She taught herself how to tap dance. She performed in school and at the local church. She took advantage of any situation that gave her an opportunity to practice her skills.

After high school, she went to study musical drama at the St. Louis Muny Theater. She moved to apprentice at the Cleveland Play House. She completed her training at the HB studio in New York. Squibb performed as a trainee artist in some plays at the Cleveland Play House. She starred in Marseilles, My Fancy, The Play’s the Thing, The Heiress, and The Detective. Squibb also appeared on Antigone, Bloomer Girl and Ladies in Retirement.

In New York, she joined the Broadway theater group. In 1958 she had her debut performance in an Off-Broadway play Boyfriend. The following year, she starred in another Off-Broadway production Lend an Ear. She then graduated to the stage theater main production. Squibb made her entrance at Broadway in 1960. She played the role of a club stripper Electra in the play Gypsy. She had another successful stint with the play the Happy Time. She got a Tony Award nomination for her role in the production.

With her rising fame, she got invitations to cover some magazines and appear in television commercials. She returned back to the stage in 1995. Squibb starred in the Broadway play Sacrilege. In 2012, she cast in the play Dividing the Estate, which premiered at the Dallas Theater Center. Squibb had a successful career in the stage acting world. She made numerous tours and performed in theaters across the US.

She entered the film acting rather late in her career. Squibb got her first film role in the 1990 Woody Allen production Alice. She was 60 years of age. She appeared in the 1992 film Scent of a woman with her role as Mrs. Hunsaker. The following year she cast in the film The Age of Innocence. In 1998, Squibb appeared in the film Meet Joe Black. She played Helen Schmidt in the 2002 film About Schmidt.

Squibb continued having roles in other films until 2018. Some of the notable films are the 2008 film Just Add Water, I’ll See You in My dreams, Love the Coopers, and Father figures. She last appeared in a 2018 film titled Ralph Breaks the Internet.

In 1985 she made her television acting debut in the series CBS School Break Special. She appeared twice in the legal series Law & Order. From 2003 to 2004, Squibb cast in five episodes of Judging Amy. She played the nun in the 2005 Bernie Mac episode Night of Terror. Squibb appeared again in the series Two and a Half Men later in the year.

From 2005 to 2007, she played the role of Grandma in six episodes of the series Ghost Whisperer. In 2008 and 2009, Squibb starred in the epic American series The Young and the Restless. She still appears in television series with her most recent being early 2019. She cast in the program The Good Doctor as Ida Guelph in the Trampoline episode.

Squibb got her fame with her role as Kate Grant in the 2003 Hollywood film Nebraska. She became a commercial success with the film after a massive positive reception after its release. Squibb received 18 nominations in 2013 and won 3 of them. In 2014, she received the most nominations, 21 in all. She won three awards out of the 21. In 2015, Squibb was nominated thrice, though she never won any of the categories.

The success of Nebraska as the leading film in three consecutive years propelled her to international fame. She got nominated for awards in the US and European film festivals. The Nebraska movie director Alexander Payne initially rejected Squibb for the role in Nebraska. He changed his mind and accepted her after appeals by other actors. The most vocal advocate in appealing for Squibb was her longtime friend and fellow actress, Margo Martindale. Squibb understood her role and religiously executed it to perfection.

In 1953 she got married to her first husband actor Edward Leon Sostek. They divorced after six years in 1959. They did not have any children. She married again in 1959 to her acting coach Charles Kakatsakis. Squibb had her only child Harry in March 1970, when she was 40 years. She became a widow upon her husband’s death on July 10, 1999.

In the 1950s Squibb converted to Judaism and has practiced the religion since then. She became an honorable member of the Cleveland Playhouse Hall of Fame.