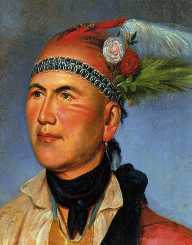 Joseph Brant, also known as Thayendanegea, was a political and military leader of the Mohawk tribe.

Joseph Brant was born along the Cuyahoga River in the Ohio Territory in March 1743. He was given the Mohawk name Thayendanegea. His parents were part of the Mohawk tribe, but they were also Christians. His father, Peter, passed away after his birth. His mother, Margaret, was a part of the Wolf Clan. She earned a living by trading the plant ginseng. He had an older sister named Molly.

Brant and his family eventually moved near the Mohawk River in the Province of New York. His mother married a tribal chief and had a son named Jacob. His sister married Sir William Johnson, an influential British diplomat. He gave Brant many opportunities and important connections to the British Empire.

From a young age, Joseph Brant was surrounded by people speaking English and German. This gave him some basic knowledge in these languages. In 1761, he joined the Moor’s Indian Charity School in the town of Lebanon, Connecticut. He studied math and the Classics, and he also perfected his English. During this time, he joined the Anglican Church. He left the school in 1763.

As a teenager, Joseph Brant fought in the Seven Years’ War. He helped the British colonies fight against the French colonies. The most important battles he took part in were the Battle of Fort Niagara and the expedition of Montreal. The British gave him a silver medal for his service. After the war, he worked as an interpreter for the Anglican Church. He also worked as a secretary for the diplomat Guy Johnson.

Brant sided with the British forces during the American Revolutionary War. He was the leader of four of the six Iroquois nations. He mostly fought in northern Pennsylvania and southern New York along the Mohawk Valley. He became famous for his crimes during the Cherry Valley massacre and the Wyoming Valley massacre. He travelled to London and met with King George III to gain his support.

After the Revolutionary War, Native Americans lost almost all of their lands and territories. Joseph Brant tried to make the situation better. He met up with many government officials, including President George Washington. He helped the U. S. authorities sign peace treaties with several Indian tribes.

Brant was awarded some land along the Grand River in Ontario. He spent the rest of his life there, ruling over his tribe. He also continued his missionary work. He translated the Gospel of Mark and the book of prayers into Mohawk.

In 1765, Joseph Brant married a woman named Peggie. They had a daughter named Christine and a son named Isaac. Peggie suffered from tuberculosis and passed away in 1771. He then married a woman named Susanna. She died in 1777 during the American Revolutionary War. In 1780, he married Catharine Croghan. They had three sons, named Joseph, John, and Jacob, as well as four daughters, named Catharine, Elizabeth, Margareth, and Mary.

Joseph Brant passed away on November 24, 1807, in the Province of Upper Canada. He was 64 years old. In 1850, his remains were relocated to Her Majesty’s Chapel of the Mohawks in the city of Brantford, Ontario.

There are portraits of Joseph Brant displayed at the National Gallery of Canada and the Independence National Historic Park in Philadelphia. There are statues of him in Victoria Square and at the Valiants Memorial. A museum and a hospital in Ontario are named after him. The city of Brantford and the county of Brant are located in Ontario, and the town of Brant is located in New York. A township and a neighbourhood are named after his traditional Mohawk name.